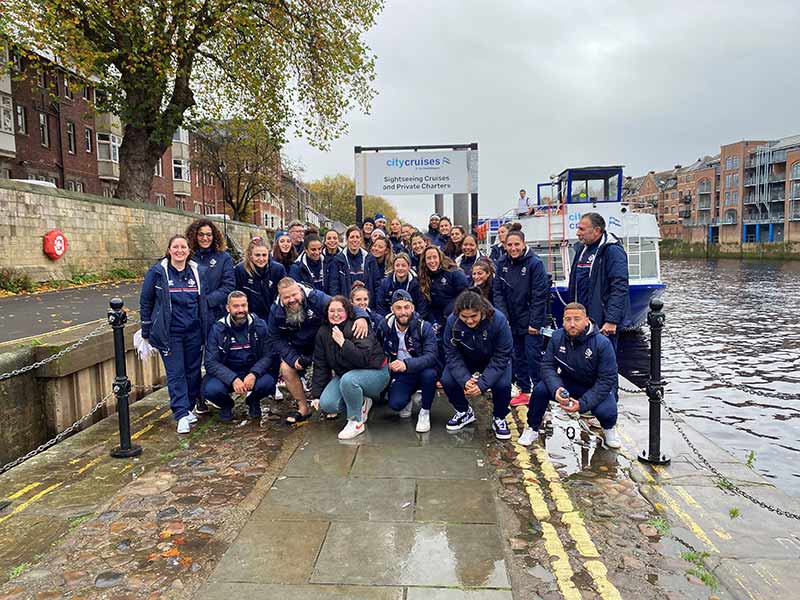 York has been filled with buzz and excitement for the last few weeks as the Rugby League World Cup has made its way into the city. With eight women’s games being held in our very own LNER Community Stadium, this is more women’s games than any other host city or town in the tournament.

A civic reception was held by The Rt Hon Lord Mayor of York who welcomed Australia, New Zealand, France and Cook Islands Women’s Rugby League World Cup teams to the city at The Principal, York.

The city is also the team base for New Zealand (Men’s) and Australia, New Zealand, France, Cook Islands (Women’s) teams, which allowed a few of the teams to come down and enjoy a City Cruise during their stay.

City Cruises York were lucky enough to have both the France (pictured) and Cook Islands women’s team join us for a cruise through the historic city. Event & Sales Coordinator, Chloe Shefford (pictured), was lucky enough to meet the France team and even grab a quick group picture! She said, “It is amazing to see all of the teams around the city, experiencing the best of what York has to offer. This is such a unique opportunity for the city and I’m glad City Cruises are able to be part of that opportunity”.

With organizers hoping at least half a million people will watch the BBC’s live coverage in the weeks ahead, it is shaping up to be an exciting couple of weeks!

Do you want to book your group onto a cruise? Then contact our Groups Team they’ll book you in quickly and easily and give you the best possible rates for the group size you are bringing.

שתף מאמר
טוויטר פייסבוק
Previous Story How to Take a Gondola Ride in Venice (Without Getting Ripped Off)
Next Story The 7 Best Things to Do in Milan, Italy