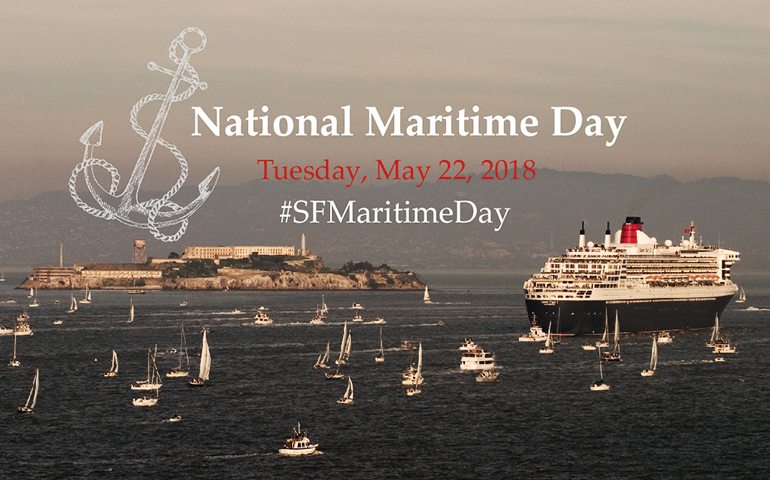 America’s National Maritime Day is a time-honored tradition that recognizes one of our country’s most important industries. In honor of the country’s maritime industry and the benefits it has brought and continues to bring to the United States, the holiday also recognizes ships and seafarers who have contributed to the nation’s maritime history.
May 22 is the date that America celebrates National Maritime Day because that’s when the steamship Savannah sailed from the United States to England, marking the first successful crossing of the Atlantic Ocean using steam propulsion.
As an example of the importance of the American Merchant Marines, more than 250,000 members served their country during World War II, with more than 6700 giving their lives, hundreds being detained as prisoners of war and more than 800 ships being sunk or damaged.
In 2006 the Maritime Administration joined forces with the American Association of Port Authorities, the US Army Corps of Engineers, Waterways Council Inc, the US Coast Guard, National Oceanic and Atmospheric Administration and other entities involved in the maritime industry to raise the awareness of National Maritime Day in order to honor the maritime industry as a whole.
The United States has always been and will always be a great maritime nation. From the country’s origins as 13 British colonies and through every stage of peace and conflict since, the Merchant Marines have been a pillar in this country’s foundation of prosperity and security. They power the world’s largest economy and strengthen our ties with trading partners around the world, all while supporting our military forces by shipping troops and supplies wherever they need to go.
For those interested in learning about San Francisco’s local maritime history, visit the San Francisco Maritime National Historical Park, which offers visitors the sights, sounds, smells and stories of Pacific Coast maritime history. The Park includes a magnificent fleet of historic ships, a Visitor Center, Maritime Museum, Maritime Research Center and Aquatic Park Historic District. The best place to start is the Maritime Museum, which is open daily from 10:00am to 4:00pm. For more information, check out https://www.nps.gov/safr/index.htm.
In observance of National Maritime Day, it is protocol for U.S. citizens to display the American flag.