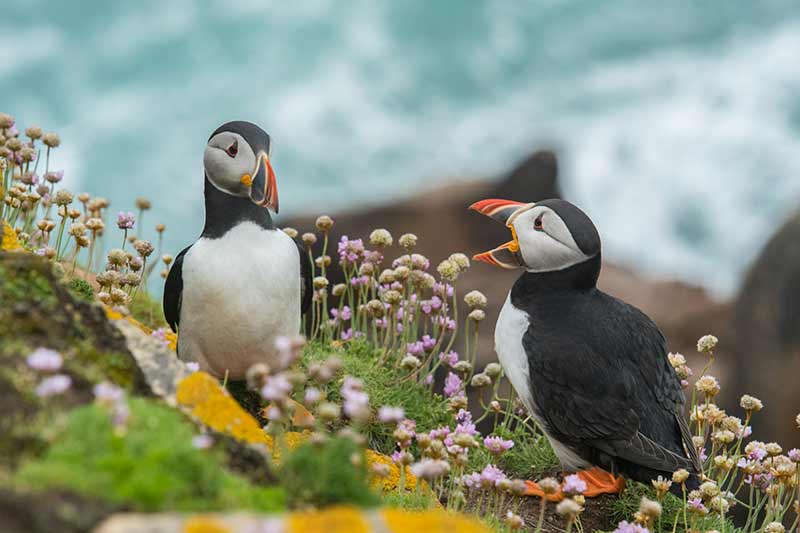 Each year throughout the spring, a colony of Puffins return to the Jurassic Coast in Dorset, UK for their nesting season. Known as one of the most comical and favourite British birds, they can be seen waddling their way to their burrows in the cliffs with half a dozen fish hanging out of their beaks so they can feed their young.

Easily recognisable with their cartoon-like appearance with black and white feathers and a large, colourful beak and orange, webbed feet. Also known as ‘Sea Parrot, ‘Penguin of the North; or ‘Clown of the Sea’. Puffins use their colourfill beaks to attract a mate and the male with the brightest beak is considered the most handsome!

The Atlantic Puffin spends the winters at sea and return to the UK to nest in Spring. They spend two thirds of their life at sea, resting on the waves when not swimming! Puffins can dive to depths of 60 metres even though they only stay underwater for only 20 or 30 seconds! Puffins are very loyal to each other and stay with their mate each year to produce one chick (known as a Puffling). Their favourite food is sand eel which they catch by diving and swimming with their wings. Their beaks are serrated to hold the fish in place and one Puffin was recorded as having 83 small sandeels in its bill at once!

They can flap their wings up to 400 times a minute when flying and can speed through the air up to 88km an hour! It is known fact that Puffins cannot fly unless they have a view of the ocean! They are also very ‘chatty’ when they are on land in their breeding colonies but remain perfectly silent when they are at sea.

However, the population is in decline and is being monitored by the National Trust to try and ensure their presence continues.  The main threats are over fishing and pollution and a  lot of the decline in the UK is from outdoor events companies using the cliffs for rock climbing and National Trust are encouraging these companies to stay away during the breeding season.

From Friday 13th May through to Friday 1st July,  City Cruises holds a dedicated Bird Watching Cruise in the UK each week to view the popular nesting locations of Puffins. Departing from Poole Quay at 6pm or Swanage Pier from 7pm, you will cruise through the spectacular Jurassic Coastline to Dancing Ledge, enjoying a live commentary from a Durlston Park Ranger.

Very popular and Informative Cruise with breathtaking views – superb whether you are a bird enthusiast or not!