The History Of An Alcatraz Prison Guard 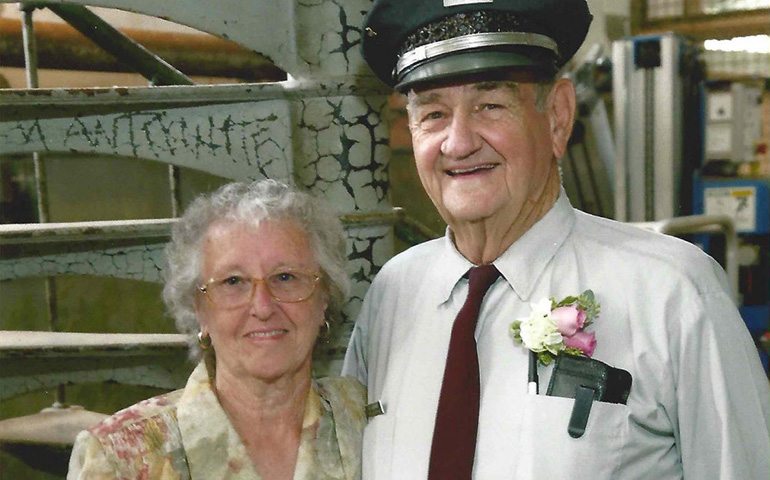 [Guest Blogger Jim Albright]
Cathy, our son Kenneth, and I were living around the Denver area when I took the test, interview, and physical for employment at the Federal Bureau of Prisons. I was trying to get hired at the Englewood, Colorado institution, but they were training officers for the Minnesota prison, which was going to re-open soon, so they were not hiring at that time.

While I was waiting for them to start hiring again, I continued working for Sealtest Dairy as a truck loader. One night when I got home from work Cathy said, “You got a letter from the government today.” It was from P.J. Madigan, the Warden at Alcatraz, asking if I would accept an appointment in San Francisco. After we got the lumps out of our throats, we talked it over and decided to accept the offer and go there to serve my first probationary year, then transfer back to Englewood.

We sold our house and furniture, loaded all our remaining possessions into a 1956 Chevy Nomad and we headed for California, having never been any farther west than Denver before.

As we crossed the Oakland Bay Bridge, we could see Alcatraz out in the bay. On that particular day, there was a thick circle of fog around the island. The sight for us, a couple youngsters, was very foreboding. I was just 24-years-old and had no previous law enforcement experience. I looked at the island, then Cathy and our 19-month-old son Kenny asleep in the back seat of the car and I said, “What in the #%@ did I do?”

We found an apartment to rent. That was tough because people would accept animals, but not children. We were about ready to put a dog collar on Kenny to find an apartment plus we wanted it close to the dock where I had to board the boat for work. We found one that was over $80.00 per month in 1959. We lived there just about three months and then got an apartment on the island.

After we moved to the island, this put Cathy and Kenny on the Alcatraz scene. They were busy learning the rules and regulations that came with living on the island and also made a lot of new friends.

I, in the meantime, was busy learning the ins and outs of prison work. I watched the other officers and found two or three of them that I thought were good officers. I made friends with them and modeled myself after them. It must have worked, because I received two promotions in less than three years while I worked at Alcatraz.

The family and I settled in and learned to love the island. We had our two daughters Vicki, born in 1961, and Donna, born in 1963. In fact, Donna was the last child born while the prison was still in operation. She was eleven days old the day the prison closed. I was left on the island from March 21, 1963 until June 22, 1963. This delay then made me the “Last Guard Out.”

After my assignment at Alcatraz, I stayed in prison work and ended my career with 26 years, working at five different prisons. I retired in Terre Haute, Indiana, because I worked that prison last and we had a home there.

We heard some years later about the yearly reunion on the island with the Alcatraz Alumni Association of which I am on the Board of Directors.

We have been attending the reunions for about 20 years. Sad to say but there is not many Alcatraz staff or inmates left. At our last reunion, we only had two guards and one inmate attend. There are a few more of us left but, because of health issues or distance, or both, they are unable to attend.

Cathy and I had a special reunion in 2015. We got permission from the National Park Service to renew our 60th wedding anniversary vows. John Cantwell, who is a ranger and also a minister, performed the services on Alcatraz in “A Block.” We had 22 relatives, about 50 Alcatraz Alumni and lots and lots of very dear friends attending.  Then, we had an Alcatraz Cruises boat pick us up on the island for a dinner cruise around the Bay.

What a bunch of fantastic memories.

Partilhar Artigo
Twitter Facebook
Previous Story Niagara College All About Options Employment Expo
Next Story Niagara Falls, a Love Story: The History of the Honeymoon Capital of the World