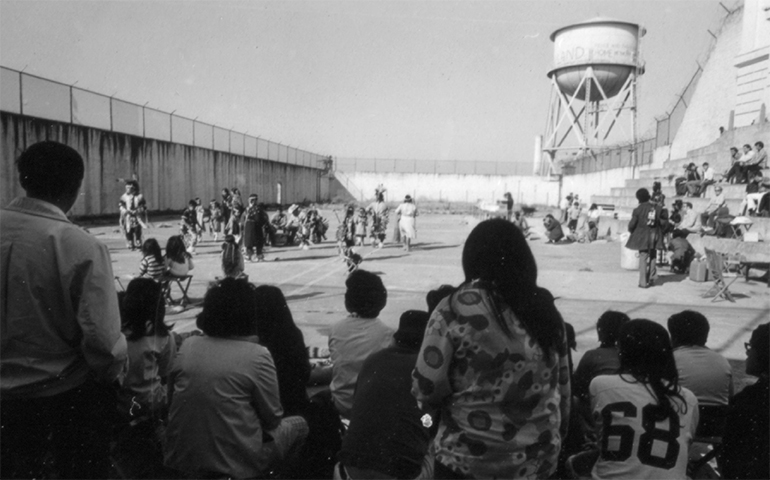 The broader story of the American Indian occupation of Alcatraz 50 years ago could easily include a larger chunk of American history — as far back as a 19th century treaty and the sale of Manhattan Island in 1626 and as far forward as present day — but the core timeline started in November 1969 and lasted for a little more than a year and a half.

After a fire in October 1969 destroyed the American Indian Center in San Francisco, a group of activists began talking about taking over the island of Alcatraz, which had been declared surplus land in 1964 following the prison’s closing the year before. A first small group of protesters that included San Francisco State student Richard Oakes boated to the island on November 9 and spent the night there before being removed by authorities.

On November 19,1969, 89 activists under the name Indians of All Tribes (known officially as Indians of All Tribes, Inc.), gathered at the No-Name Bar in Sausalito and were ferried in the middle of the night by local boaters sympathetic to the movement. Citing an 1868 treaty that allowed American Indians to take over “surplus federal land,” as well as a history of occupation on Alcatraz by some of the San Francisco Bay Area’s earliest indigenous peoples, the 14 protesters who made it ashore in the first journey laid claim to the island and began setting up the occupation of the former federal penitentiary.

A Coast Guard blockade of the island prevented most of the boats from landing on the initial trip, but as boats continued to get through, the population of Alcatraz grew to 600 people within months. Officials in President Richard Nixon’s staff proposed storming the island with federal marshals, but held off for fear of a high-profile assault on a group that included women and children.

According to a proclamation that was delivered to the media and government officials by emerging leader Richard Oakes, the Indians of All Tribes had taken control of the island, but were prepared to pay “$24 in glass beads and red cloth” for the property, the amount that European settlers paid American Indians for the island of Manhattan. The group planned to build a cultural center for Native American Studies, a museum, a spiritual center and an ecology center.

By the second day on the island, organizers had set up a health clinic. Eventually, the staff included three volunteer doctors and two nurses, making it possible to respond to emergencies at all hours. On December 11, 1969, the Indians of All Tribes opened the Big Rock School, admitting 12 elementary students (kindergarten through sixth grade), although enrollment grew to 22 students by the end of the month. The curriculum included most of the typical subjects — reading, math, geography — as well as native history, culture and native arts. Students occasionally left the island on field trips to the Oakland Art Museum, the Morrison Planetarium and the San Francisco Zoo.

On December 22, Berkeley radio station KPFA-FM began running a daily prime-time broadcast from the island, known as Radio Free Alcatraz, which also aired on KPFA’s affiliate stations in New York and Los Angeles. Programming stressed Indian culture, as well as political and societal issues on the island and with tribal members everywhere. The broadcasts, directed by John Trudell, a Santee Sioux from Nebraska, lasted until late 1970.

While public support was strong initially, including union groups and celebrities such as Jane Fonda, Marlon Brando and the band Creedence Clearwater Revival (which donated $15,000 for a boat), the realities of trying to sustain a large community on the island with an aging infrastructure and no fresh water were increasingly apparent in early 1970.

At the same time that Indians of All Tribes leaders were making a formal request of the National Council on Indian Opportunity for facilities, equipment, medical supplies and transportation to make the island more inhabitable, officials with the federal General Services Administration — overseers of the island — continued to advise Indians of All Tribes and the media that the occupiers were considered “trespassers” and that the federal government “assumes no responsibility for your safety while you remain on this island.”

In January, Richard Oakes’ 13-year-old stepdaughter, Yvonne, died from a fall down several flights of steps. Oakes and his family left the island to mourn, leaving other leaders of Indians of All Tribes to take over planning for the island and negotiations with the government, from which American Indian leaders insisted on nothing less than the deed to the land and money for a university there.

Occupation leaders faced increasing difficulties with non-Indian visitors, mostly members of San Francisco’s hippie drug culture who gravitated to the anti-government cause and free lodging. Indians of All Tribes leaders eventually banned non-Indians from spending the night, although by that point the population of tribal members was already on the decline as students returned to school. By May 1970, the government was working toward transferring Alcatraz to operate under the jurisdiction of the Department of the Interior with the goal of including it in the National Park system.

While the movement had lost some of its initial momentum by mid-1970, the public attention it had gained prompted Nixon’s White House in July to end to the government’s policy of “termination” of benefits and land for Indian Americans and the president said “self-determination among Indian people can and must be encouraged without the threat of eventual termination.” At the first anniversary of the occupation, the Indians of All Tribes held a press conference to unveil plans for Thunderbird University on the island.

In the summer of 1970, federal officials cut off water to Alcatraz. In response, Indians of All Tribes leaders announced they would begin offering tours of the island to raise money to buy bottled water and other supplies. General Services Administration officials quickly announced that the island is “unsafe and dangerous” and that any trespassers on the island would be prosecuted.

Fires on Alcatraz in June 1970 had destroyed several of the major structures and knocked out the lighthouse, which was still being used for navigation on San Francisco Bay. A collision in January 1971 between two tanker ships, which dumped 800,000 gallons of crude near the Golden Gate Bridge, was blamed on the lack of a working lighthouse on Alcatraz, further eroding public support for the occupation.

Within months, officials cut the last electric power to the island and, by June 11, 1971, when federal personnel stormed the island, there were just 15 people left, five of them children. While the occupation itself didn’t achieve its original goals, it is widely credited with having spawned hundreds of other American Indian protests and a growing awareness of related issues in the United States and elsewhere.

In 1972, Alcatraz Island was incorporated into the Golden Gate National Recreation Area, part of the U.S. National Parks system.