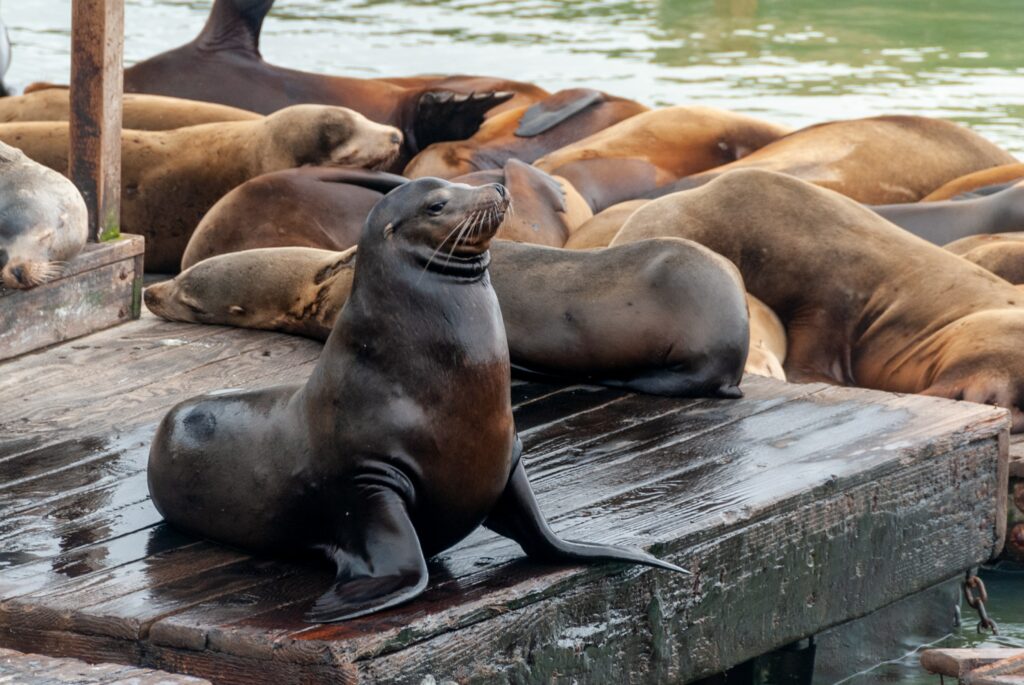 Check Out All the Wildlife that San Francisco Has to Offer

When you think of San Francisco, you may think of a unique and exciting city that twinkles against the night sky and lights up the San Francisco Bay. You may even imagine hearing the voice of Tony Bennett singing “I Left My Heart In San Francisco”.

There’s no doubt that San Francisco has spectacular views, lively and eclectic neighborhoods, fine dining and food of various cultures, nightlife with lots of dancing and live concerts, those famed cable cars for which the city is known, and so much more. You can also see an abundance of wildlife in the city by the Bay.

Check Out the Wildlife in San Francisco

If you’re in the Bay Area, you’ll find an abundance of California wildlife. “From the cool, blue depths of San Francisco Bay, to the sage-covered hills of Mount Diablo, the Bay area offers a multitude of species – mammals, birds, reptiles, amphibians, fish and insects.”

Of course, San Francisco Bay is also home to an abundance of wildlife. More than 500 fish species and wildlife including salmon, sharks, oysters, shrimp, and marine mammals such as seals, sea lions, and dolphins live there.

The sea lions at Pier 39’s West Marina have a history since January 1990. They began making themselves known there directly following the Loma Prieta earthquake in 1989. “At first they numbered from 10-50, but due to a plentiful herring supply, available dock space and the marina’s protected environment, the population grew to more than 300 within a few months.”

These loud pinnipeds literally took over the pier’s K-Dock. The marina tenants were not so excited at first and staff there requested some help from The Marine Mammal Center, which dedicates its services to the rescue and rehabilitation of marine mammals. Experts at the center found that it was best to leave the sea lions there, and so it became their new home.

Today you can visit and watch these delightful sea lions who are known as the Pier’s “Sea Lebrities.” During the winter months, the sea lion population at the Pier can reach 900, mostly males. In the summer, they head south to the Channel Islands for breeding, although some do stay behind for the entire year.

Seasonal Whale Watching in the North and South Bay

Whale watching is not only a great form of entertainment, but it’s also not just a form of enjoyment for many people, it is now very important when it comes to educating people about whales, other mammals, and our environment. Whale watching is done in the natural habitat of whales, “which involves spectators standing at the end of a pier or on the deck of a boat with binoculars watching these marine mammals as they live undisturbed in their natural habitat.”

In San Francisco whale watching is popular and happens during two seasons: December to April is Gray Whale season and summer/fall is the season for other whales such as Humpback Whales and Blue Whales. Most often, you’ll whale watch while on a boat or you can also see whales from the shore depending on where you are and what time you’re there.

If you prefer watching by boat, Monterey Bay and around Farallon Islands are the prime places to whale watch. By land, the best spots are Big Sur coast, Point Reyes, and Pigeon Point.

Check out the Oceanic Society for Gray Whale cruises that leave from San Francisco’s Pier 39 and Half Moon Bay and Santa Cruz. They offer full- and half-day trips to spot whales and other marine life.

Spot Porpoises and Bottlenose Dolphins in the Bay

Many people, especially animal lovers, delight in spotting porpoises and bottlenose dolphins. Today these special aquatic mammals can also be seen under the famous and iconic Golden Gate Bridge while searching for fish and body-surfing.

Porpoises have been seen again in the San Francisco Bay in 2008 after an absence for some time during World War II. Bottlenose dolphins are now seen in the bay, especially since El Niño brought some warm water. They became permanent residents by 2016. A great place to view them is around Fort Point, which is under the Golden Gate Bridge.

Did you know that dolphins and porpoises are not the same. “Porpoises have spade-shaped teeth; short, triangular dorsal fins—think shark—and blunt heads,” while dolphins typically “generally have conical teeth, curved dorsal fins—not shark—and an elongated snout.”

While you’re at Pier 39 in San Francisco, you’ll want to visit Aquarium of the Bay, a real treat for those who love marine life. More than 20,000 local marine animals call the aquarium their home and you can get up close and personal during your visit.

Put a day aside so you can not only learn about San Francisco-area marine life but also explore all the aquarium’s fascinating exhibits that will educate you as your senses come alive. Learn about sea creatures, then walk through huge tunnels while sharks and bat rays swim over you.

The Aquarium of the Bay has something for everyone in the family. You’ll learn so much through educational presentations and then interact with a touch tank featuring leopard sharks and sea stars. It’s a day you’ll never forget and will remember all the incredible marine life you encountered.

Take a Trip to the San Francisco Zoo

Take a whole day and learn about more animals at the San Francisco Zoo and Gardens. You’ll find more than, 2,000 exotic, rescued, and endangered animals that represent more than 250 species. In the zoo’s gardens, you’ll find plants that are native to California as well as specimens from exotic locales.

You can find animals native to Africa at the Leanne B. Roberts African Savanna exhibit. Animals there include zebras, giraffes, and kudus. In Penguin Island you can watch Magellanic penguins.

The Zoo houses the Lipman Lemur Forest, which is home to the largest outdoor lemur habitat in the U.S. You’ll also interact with farm animals when you visit the Fisher Family Children’s Zoo.

When in San Francisco you’ll have many choices to see some amazing wildlife. Whether it’s watching the dolphins under the Golden Gate Bridge or learning about lemurs at the zoo, there’s something for everyone to take away.