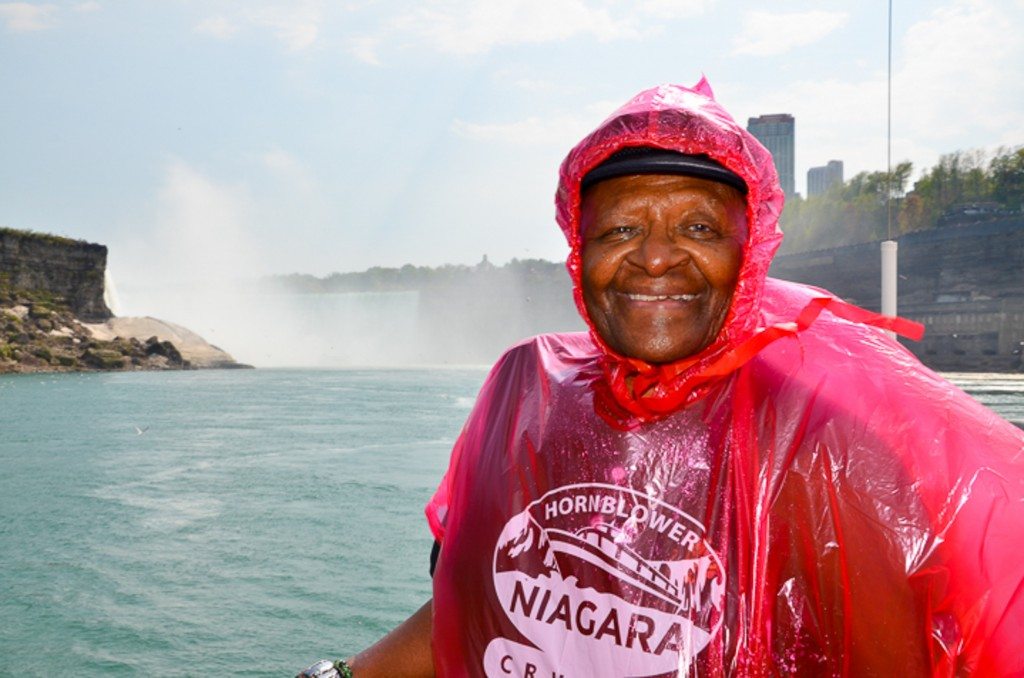 Since opening in 2014 we’ve had the great pleasure to host many famous and influential guests on our Hornblower Voyage to the Falls boat tour. They found out what all our guests already know, that no trip to Niagara is complete without going #InTheMist with Hornblower!

From King George to Shirley Temple, Christopher Reeve to The Radio City Rockettes, everyone who is anyone has visited Niagara Falls. And we love being a part of their visit!
We’ve put together the long list of our favourite famous visitors who’ve joined us for a boat tour. Scroll down and see which of our celebrity guests is your favourite!

This Nobel Peace Prize Laureate South African visited us in May of 2014. Along with a group of 60 other Chief Executives from the St. John’s Order, Mr Tutu boarded our Niagara Wonder to feel the mist on his skin. We loved having him and the entire group from St.John join us for a once in a lifetime experience.

These two interior designers from across the pond joined us for a truly Canadian experience! While they’ve been in Canada for some time filming their hit shows Game of Homes and Cabin Pressure they hadn’t yet experienced Niagara Falls. If you ask them, they’ll tell you, “It’s like nothing else on earth!”

Glamour models and lifestyle micro influencers Trista and Becca visited with Somnium Lifestyles while doing a photo shoot in the area.

Canadian country rockers River Town Saints sailed #InTheMist with us while in town for the Niagara Wine Festival. They rocked the show in St.Catharines, but Niagara Falls rocked their world up close and personal first!

This great Brit, future astronaut and One Young World speaker was in Canada for the One Young World Ottawa conference. He knew he couldn’t come all the way to Canada and not see this world wonder for himself. See the video of his experience here!

Pretty Little Liars star Ashley Benson was in Toronto filming “Pixels” with Adam Sandler when she came for a visit. Being so close to Niagara and not coming to see it up close and personal would have been the mistake of a lifetime!

Speaking of Adam Sandler… This funny man visited with his whole family when filming Pixels in Toronto. We don’t know who liked it more, him or his children!

From American funny man to Canadian funny man! Rick Mercer came aboard with his Rick Mercer Report crew and filmed one hilarious segment with us. When this aired all of Canada got to see how much fun sailing with Hornblower can be!

Supermodel Kate Moss had been to Canada a few times before her visit to Niagara Falls. But she felt like she hadn’t truly experienced Canada until she saw Niagara Falls up close and personal.

The hit morning television program Sunrise Australia from down under visited Hornblower during our first season. We loved hosting them and having them take their experience back to their home country of Australia made us proud.

One of the highlights of 2016 across the world was the summer Olympics in Rio! We were proud to be able to host the reveal of the Canadian Olympic Wrestling team in our Private Event Tent. These amazing young people loved getting #InTheMist before their trip to Rio. One of these Olympians even went on to win gold at the event!

Holding the title of our most famous non-living celebrity the Travelocity Roaming Gnome visited and even put on a poncho to keep dry. He even almost lost his hat in the roar of the mighty mist!

This national news broadcast did a story on the power and energy produced by Niagara Falls. And of course, they had to come aboard the Hornblower to film the true power of the Canadian Horseshoe Falls.

See the video that they filmed from our boats here!

Our Lady Peace front man and one-half of the Moon and Sun duo brought his mother and kids #InTheMist when he was performing in nearby Niagara-on-the-Lake.