Growing Up On Alcatraz 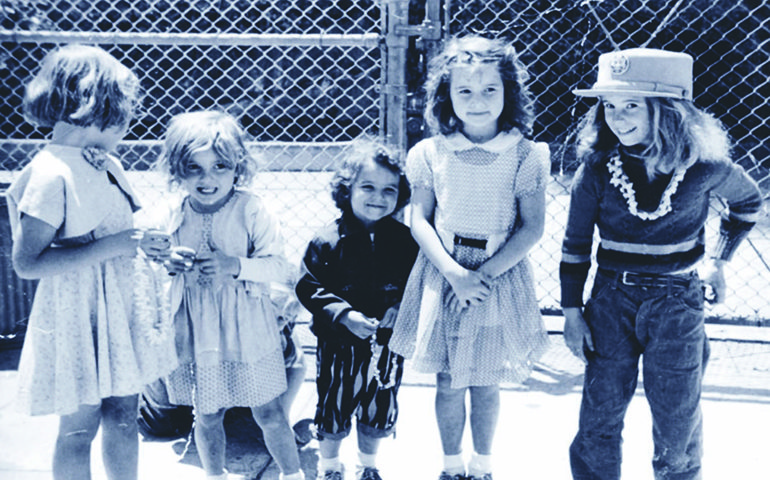 Guest Blog Post – Jolene Babyak
Among the many revelations about Alcatraz Federal Penitentiary that surprise most people is that families also resided there.
Surprised, at least, until I remind them that children also live in funeral homes (which seems scarier) or reside in apartments above jails because their mother or father is the local sheriff. In fact, all Alcatraz prisoners lived securely “up top,” away from us and most worked on the opposite side of the Island, thus were mostly out of our sight.
Sixty families lived on “the Rock,” about half the staff. Seventy-five kids were usually in my neighborhood. And since we kids went to schools in San Francisco (you could either swim or take the boat), many of us often only saw prisoners in the summers and usually only in groups of one or two accompanied by an officer. Heck, except for the dock tower, I hardly ever saw a gun. And our fathers, many of whom were from the WWII era, seldom talked about the prison at the dinner table. If there was a stabbing up top, I didn’t hear about it. So, to us, “the Rock” was a low crime neighborhood.
What we didn’t know was that many of the one percent of the federal prisoners in the nation who were imprisoned there had been emotionally or psychologically impaired before the first grade. And we weren’t aware of the select number of men with mental illnesses or personality disorders who were contained in D block, the high security wing which separated them from us as well as other prisoners. I’m sure we would have had even more respect for our fathers had we known who they were sometimes working with. And perhaps more surprising to most people, many prisoners turned their lives around, often because they worked with our fathers.
And while escapes were sometimes scary and sometimes resulted in the deaths of officers and the departure of families from the Island, at other times they were funny or weirdly baffling or even admirable. All of this made our “hood” an exciting, exotic place to live, despite the sometimes-crappy weather. Few of us would have given up our block to live somewhere else. Except maybe Hawaii. Which also has prisons, if you think about it.
To hear more of Jolene’s in-depth anecdotes about growing up on Alcatraz Island during the U.S. Penitentiary era, come join Alcatraz Cruises as we present the last in our speaker series at the Parc 55 Hotel from 5:30-6:30PM on Thursday, May 24. Complimentary appetizers and one beverage will be hosted for all of our guests.
Register Here!