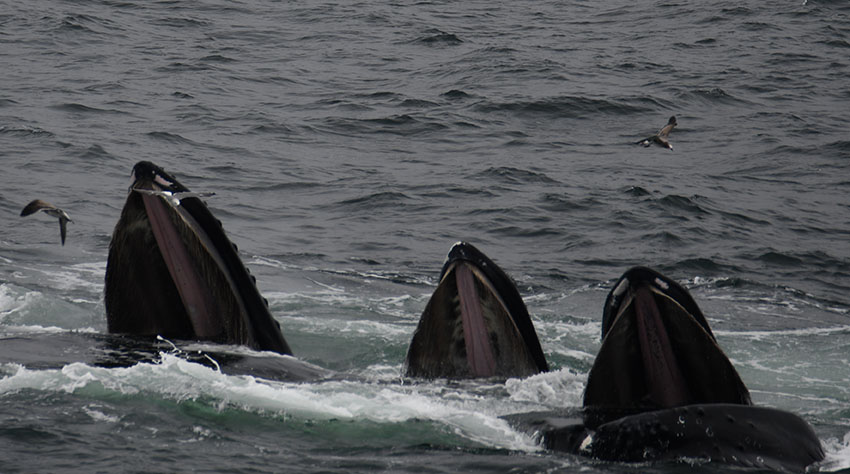 The 12PM Whale Watch aboard the Aurora went out eager to find whales. We were originally headed towards the middle of the Bank, but turned South when we heard reports of whale activity. When we arrived in the Southern portion of the Stellwagen Bank, we were overjoyed to find between 30-40 Humpback whales in the area! These whales were actively kick feeding and bubble feeding all around making it impossible to decide where to look! These whales were attracting large flocks of birds and creating huge patches of green water as they fed. We actively watched over twenty whales, including Freckles, Dome, Cat_Eyes, Tear, Etch-A-Sketch, Entropy, Tectonic, Columbia, Indiana, Buckshot, Rocker, GOM-1521, and Infinity. In addition, we had three mom/calf pairs mixed in with the other whales: Salt and Miso (Salt’s 2022 calf), Sanchal (Salt’s daughter) and her 22 calf (Salt’s grand-calf), and Samovar and her 22 calf. In addition to the Humpback activity, we noticed multiple minke whales and a fin whale that were feeding in the area.

We watched these whales until we reluctantly had to return to Boston. A truly fantastic day on the water!

We boarded the Asteria for the 10 a.m. whale watched and headed across a strong swell toward the southern end of Stellwagen Bank. Our sightings started early, with a look at a rugged and large mola mola, as well as a small nursery pod of common dolphins as we made our way south! Just south of Stellwagen, once again at Peaked Hill, we found ourselves in the presence of around 40 whales! A majority of our time was spent with a large group of feeding humpbacks, made up of anywhere between 6-10 individuals at any given time. IDs we were able to confirm included Infinity, Jumanji, Evolution, Indiana, Samovar, her 2022 calf, and several others that have yet to be identified. This group treated us to perfect bubble nets, powerful lunges, loud trumpets, and incredibly close approaches. Several kickfeeding humpbacks could be seen, including Reflection, who also remained nearby and showed off her unique style. A pair of fin whales spent a surprisingly long time in one area, likely taking advantage of the bait themselves. As time ran out, we turned west, just in time to witness a stunning breach from a humpback! With this last look, we headed back toward Boston, that same swell now easing us back home after another lovely day in the presence of whales.

Yesterday aboard the Aurora on the 12pm whale watch, we headed south to Peaked Hill where our morning whale watch found the whale aggregation. The long trip south was completely worth it, as we totaled 40-50 whales spread over a couple miles! We had quite a mix of humpbacks, fin whales, and minkes, giving us great opportunities to observe all three common whale species to the area. In addition, we spotted great shearwaters, sooty shearwaters, Bonaparte’s gulls, and common terns! As we first arrived to the area, we found ourselves surrounded by fin whales in all directions – in an area local researchers call “fin whale alley”. As we headed a little further, we then found many scattered humpback whales kick and bubble cloud feeding, indicating the prey was moving a little deeper in the water column. Familiar flukes we spotted amongst were Reaper, Cosmos, Columbia, and Banyan. A great day on the water!

There are no words for a trip like this! We had a group of 11 humpbacks bubble feeding, calf breaches, and kick feeding all around us throughout the trip! Plus seabirds galore – terns, shearwaters, and gulls! We also had 5-10 fin whales, and tons of minke whales as well! See photos below!

The Asteria headed out on the 10am whale watch towards southern Stellwagen Bank near Peaked Hill. We were happy to see that the whale pile that has been around the last few days was still present and active! We estimated that were at least 25-30 humpbacks, 8-10 minke whales, and 10-12 fin whales feeding! We had multiple groups of humpback whales with 5-8 individuals, who were cooperatively bubble net feeding. We also had a few individuals in the area kick-feeding and lunging! Towards the end of the trip, we saw two bubble-net groups join and were able to see a large group of at least 12 individuals feed together! Familiar flukes included Putter, Cat-Eyes, Reflection, Wizard, Salt and her 2022 calf Miso! I’ve never seen Salt, the queen of Stellwagen Bank, before this week – and it was great to see her and Miso in the middle of the feeding activity taking advantage of all the fish!

WOW another fantastic day!!! Words can’t do the trip justice! We had many calves flipper slapping, bubble net and kick feeding, along with fin whales and minke whales in the area! Plus a close approach by Doric!

The Asteria headed out towards Peaked Hill in search of whales, and started our trip with some fantastic looks at a Fin whale. We continued our journey East, and encountered a breaching Mola Mola, before finding 20-30 feeding humpbacks! Shortly after arriving, we witnessed a recreational vessel speed through the area, serving as an unfortunate reminder of the major threats faced by these cetaceans. We used this as an opportunity to learn more about what responsible boating looks like and encouraged all passengers to check out seeaspout.org . We spent time with many humpbacks, and were able to ID Buckshot and her calf, Wizard and her calf, as well as Abrasion 22 Calf. One of these younger whales did surprise us by breaching right off the port side as we got ready to depart, making for a wonderful ending to our trip.

The 2:30 pm trip headed south, and before even reaching the bank, we were treated to some very rare looks at the CCS research team, as they attempted to biopsy a humpback who they had just disentangled! It was incredible to see this team at work, and we again took advantage of this incredible opportunity to educate passengers about what they can do to help protect and preserve these species. We continued towards the area we had found whales in the morning, and we were surprised to see very little activity. We travelled further East, to find 40-50 humpback whales scattered in large groupings all around us! We were greeted with a massive breach off our pulpits, and spent the rest of our trip watching whales flipper slap, lunge, blow bubble nets, and tail breach on all sides of the vessel. We were able to ID Evolution, Snare, Springboard, Tracer, Combat, Thalassa, Pinpoint, Kappa, and Cosmos and her Calf. As we made our way home, our path was lined with flipper slapping and feeding humpbacks.