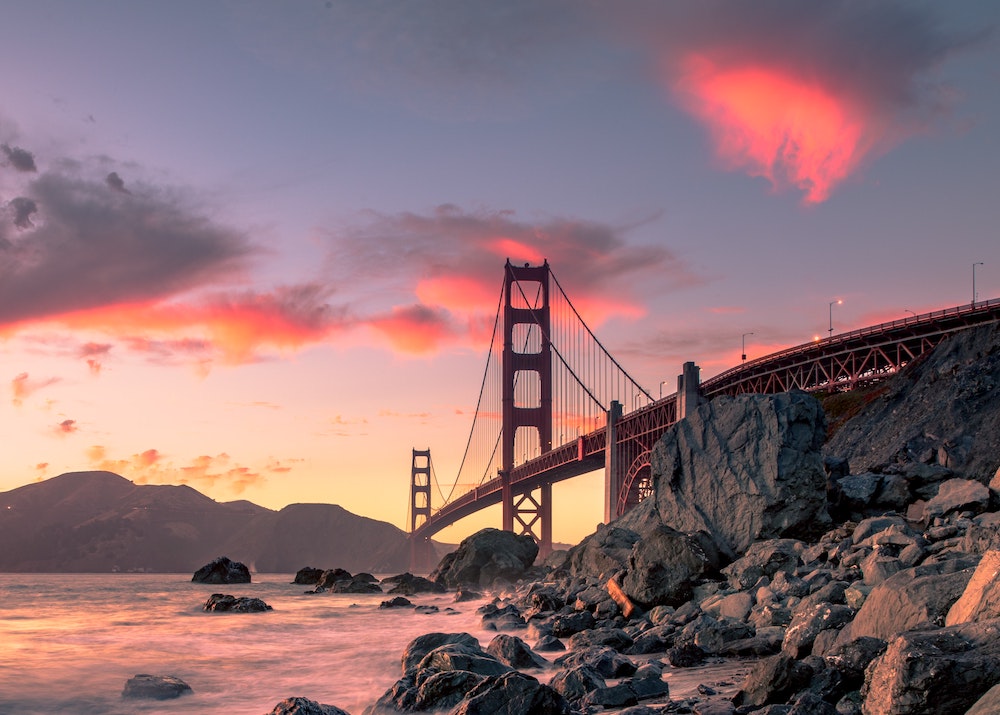 One of the greatest treats the San Francisco Bay Area has to offer is panoramic views of some spectacular sunsets.

An easy way to catch Mother Nature’s nightly show is to hop on a boat and watch the San Francisco sunset at your leisure, over dinner and drinks on a Premier Dinner Cruise with City Cruises.

You could also make a day of it with a scenic, eight-hour Bay cruise that takes in some of San Francisco’s most iconic sights, including the Golden Gate Bridge, Chinatown, and Fisherman’s Wharf. It departs in late morning, so you’ll have the opportunity to spend the day out on the water and still catch the sunset in San Francisco.

Over on the mainland, we’ve rounded up the best places to see the sunset in São Francisco, from the Golden Gate Bridge to Lands End Lookout, Baker Beach to Twin Peaks. 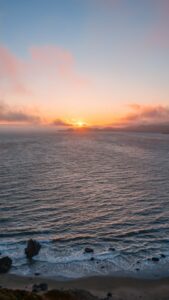 Where can you see the best San Francisco sunsets?

The City by the Bay boasts an embarrassment of riches when it comes to places to watch the sunset with spectacular views. But if you want to go all in, you can watch a San Francisco sunset from one of the city’s most dramatic locations, Baker Beach.

As long as the fog cooperates and holds off for a bit, you can see the iconic Golden Gate Bridge and the luxurious coastal mansions dotting the cliff from Baker Beach, all while taking in a stunning sunset right smack on the Pacific Ocean, with sand between your toes and sea salt in your hair. It’s a premier San Francisco sunset spot. If you’re feeling adventurous, you could rent a bike from Ghirardelli Square and pedal around downtown San Francisco, the Ferry Building, the Mission District, and Golden Gate Park on your way to the Golden Gate Bridge, another iconic spot to watch the sun sink over the San Francisco Bay.

Time your ride properly and you’ll be coasting across the bridge to Sausalito just as the sun starts to slip beneath the horizon. From that vantage point, you’ll have an amazing view of the grand finale, as the sky turns from a red-orange, golden light to subtle evening blues, pinks, and purples.

What’s the most beautiful place to watch the sunset in San Francisco?

You could head to Lands End Lookout, located along the northwest coastal-trail section of the Golden Gate National Recreational Area. Here you’ll find rocky beaches and a bold coastal trail moderate enough for most hikers of all ages.

If you’re a stargazer or a nature lover, you’d do well to head out to Grizzly Peak. It’s actually part of Berkeley Hills, but it offers a fabulous view of the city skyline, the Golden Gate Bridge, and the Bay. Pack a picnic, head out well before sunset, and make an evening of it: A meandering road leads to the park, where you can stake out a spot to watch the sunset. (You’ll likely be high up enough have a view over the fog if it’s hanging around.) Afterwards, lie on your back and take in the night sky’s constellations away from the city lights.

Crissy Field is another great spot to watch a San Francisco sunset. This former US Army airfield and restored marshfield is snuggled between the Palace of Fine Arts and Battery East, just shy of the Presidio near the Walt Disney Family Museum. The flat marshfield makes for some sweeping seaside views, and you’re likely to spy the local wildlife that calls the preserve home.

Built in 1939 for the Golden Gate International Exhibition, Treasure Island is one of the best places to see the sunset in San Francisco. If you position yourself on the artificial island along the Avenue of the Palms, you can watch the sun set across the entire northern waterfront, from the Golden Gate Bridge to the Bay Bridge.

Last but not least is Twin Peaks, an area of the city located some 900 or so feet above the Pacific Ocean, not far from the aptly named Sunset District. Its higher vantage point is a great spot to take in the sunset show, thanks to panoramic views of the entire city that encompass the San Francisco skyline, the Bay, and the Pacific Ocean. Head up in the afternoon and explore some of the fantastic hiking trails in the Twin Peaks area, then rest up with a snack while you watch the sun dip under the horizon.

Tips for finding the best sunset spot in San Francisco

Some of the city’s best San Francisco sunset spots are those you stumble upon without having planned in advance. Just look up: Whether it’s a pink sky framing the downtown skyline or spectacular views from an uncrowded hiking trail, sunsets in San Francisco can stop you in your tracks when you least expect it.

That said, it’s not a bad idea to check the weather conditions around sunset time—remember, there’s fog galore in this neck of the woods!—and plan your viewing in advance, especially if you aren’t staying long in the Bay Area. It’s worth it—San Francisco sunsets are some of the prettiest in the world.