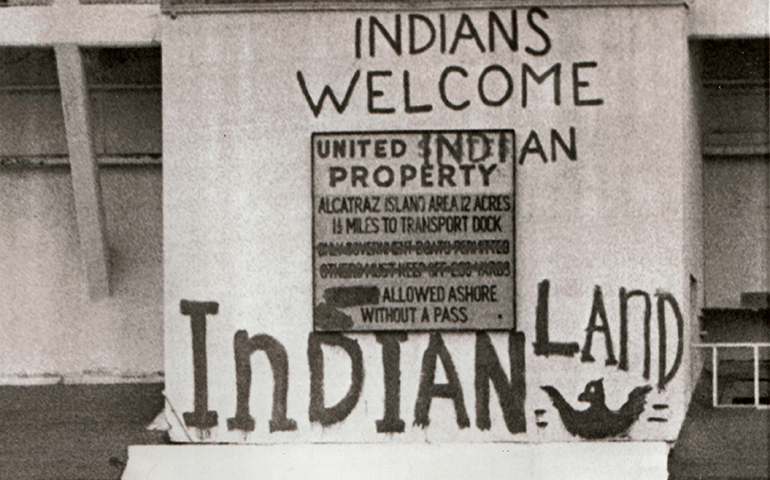 Currently, the ceremonies are organized by the International Indian Treaty Council and American Indian Contemporary Arts.

The events are designed to commemorate the survival of Native American Peoples following the settlement of Europeans in the Western Hemisphere, which led to genocide and enormous economic and cultural losses among the indigenous from disease, warfare and social disruption.

In 1969, a number of Native American members of the Alcatraz-Red Power Movement’s Indians of All Tribes group occupied the island under the terms of the 1868 Treaty of Fort Laramie in which surplus government land was allocated to Native Americans. The occupation lasted for 19 months, from November 20, 1969 to June 11, 1971.

They were visited by members of the American Indian Movement, who inspired by the occupation, led to other protests, including the first on Thanksgiving Day in 1970.

During the occupation, hundreds of Native Americans joined the movement to speak out for their rights. This was part of a heavy period of Indian activism and protest at a time when the Civil Rights Movement was at its peak.

Every year on the United States’ Thanksgiving, several thousand indigenous people and spectators travel to Alcatraz Island where groups dance before sunrise in order to honor their ancestors. Other groups demonstrate other aspects of their cultures and heritage. The celebration is open to the public. Additionally, a similar sunrise ceremony is held on Indigenous Peoples Day.

Details and reservations for the two ceremonies are as follows:

On November 28, the Ticketbooth opens at 3:00AM and ferries will depart Pier 33 approximately every 15 minutes from 4:15AM-6:00AM. General admission is $14.00 per person. Children under five years of age are free.

Reservations can be made at the Pier 33 Alcatraz Landing Ticketbooth. However, it is anticipated that tickets will be sold out, so it is strongly recommended that all participants make arrangements in advance by calling 415-981-7625 or online at https://www.alcatrazcruises.com/programs-and-events/annual-events/indigenous-peoples-sunrise-gathering/.