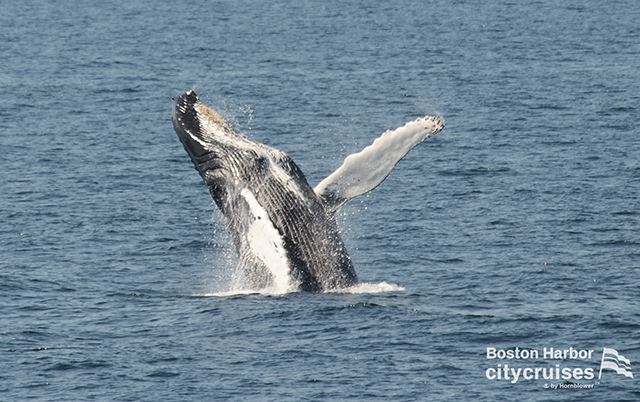 After a long weekend of no whale watches due to stormy weather, the 10am headed out on the Asteria towards the midbank region of Stellwagen Bank in search of wildlife. We were happy to initially find two blows and first spent our time with the two humpbacks Tripod and Pixar. This pair seemed to be very surface active from a distance and slowed down a bit as we got closer, showing off some very lazy flipper slaps and slow fluking dives. We then shifted our attention to the faster moving Dyad and Dyad 21 Calf, who were moving quickly through the area. As soon as we got on this pair, they beelined towards the now logging Tripod and Pixar. Once the mom and calf pair joined up with Tripod and Pixar, it seemed like the sleepy whales were not happy about their new visitors. Tripod and Pixar went on a bout of incredible breaching – it was so amazing seeing two adult whales breach right off our bow!! There were some trumpeting exchanges from Tripod and Pixar, and Dyad returned with a few noisy flipper slaps. These two groups split as quickly as they joined, and it was really cool to see such an abrupt change of behavior – from logging to breaching in a matter of minutes!

We then followed Dyad and calf as they quickly swam to another pair –Dross and Dross 21 Calf. We got some great looks at this new mom and calf pair and a great mola mola before turning back to Boston.

What an absolutely awesome day on the water!!

Today felt like the most perfect fall day, thank others crisp air, clear visibility, and gorgeous calm sea conditions. The whales were pretty great, too! We had spotted a few blows ahead of us but paused to watch a mola mola after it caught our attention with a big breach. After some time with this massive fish, we watched a single yet-to-be-named humpback for a brief period until we moved on to a group of four adult humpbacks. Pitcher seemed to be leading the charge between herself, Music, Glo, and Bounce as the group lazed about and dove infrequently, while Gunslinger dove and surfaced on its own nearby. Before our time in the Stellwagen Bank National Marine Sanctuary was over, a pod of Atlantic white sided dolphins zipped through as they swam to the north. Intermittent splashing in the distance throughout the trip led us to believe that a number of other sunfish dotted the area and we cruised back to Boston under the warm sunshine.

It was interesting to see the movements that the whales had made from Tuesday. We first found the same unnamed whale as the day before, but now it was swimming side by side with Bounce. I wonder when Bounce had split off from the other three whales she had been with yesterday and what it means now that these two are together instead. This is hale has a catalog number as it’s official ID but was dubbed “Linda” by a group of students on board. While not following the scientific naming guidelines, they were all really great kids so we’ll let it slide for today! 🙂

Music and Pitcher were found nearby so we had our last chunk of time on the bank with them. Their slow movements and high flukes allowed for some great looks. An interesting bonus to the day were the multiple breaching mola mola that kept surprising us intermittently. Why are these fish suddenly spotted nearby everyday breaching is a bit of a mystery and perhaps the curious minds of those aboard will investigate these events in years to come.

Even though the skies were gray and rainy, we had a great afternoon aboard the Aurora. On our way out of the harbor we spotted a peregrine falcon, as well as some fall sea ducks such as mergansers. Offshore, we were elated to spot some big distance breaches and flipper slapping, and these whales turned out to be veteran female Orbit (also known as Stingray in the past) and her 2021 calf. Her calf treated us to a few more breaches, and then this pair began traveling south and taking deep dives. On the way home, we also spotted two blue herons offshore.

After a bit of searching, we encountered several blows in the southern region of Stellwagen Bank. Our sightings started with three humpback whales that included Orbit, her 2021 calf and one other individual. This trio quickly split, and we followed the mom and calf pair for a bit as they lazily travelled. Eventually we moved on to a duo of unnamed humpbacks that included 16BH149 and “Chunk“. The behavior of these two were drastically different than the former sleepy group. These quick moving whales were circling around an area, most likely chasing fish underwater. They surfaced often and powerfully, and after several great looks at these two we made our way back towards land.

Today aboard the Aurora, the 11am whale watch headed out towards the northwest corner of Stellwagen Bank in search of whales and other marine life.  As we came into the area we saw several scattered blows.  We started on a pair of humpback whales who were identified as Crown and Tongs.  These two ladies were spending a lot of time at the surface so we got some great looks at them!  After some looks at them, we went for a little bit of a ride to another pair of humpbacks consisting of Dyad and her 2021 calf.  These two were also spending a lot of time at the surface, and the calf was rolling around a lot.  While the pair was on a dive, we got some great looks at a blue shark!  After some beautiful fluking dives, we noticed some splashing in the distance.  After a little bit of a ride we noticed the splashing had come from Crown and Tongs who had been joined by a pod of Atlantic white-sided dolphins!  After some great final looks, we had to head back to Boston.  It was a really great day out on Stellwagen!

Today aboard the Asteria, the 10am whale watch made its way out towards a foggy Stellwagen Bank in search of whales and other marine life.  We started our trip on a mom and calf humpback pair consisting of Dross and her 2021 calf.  They were cruising at the surface so we got some really beautiful looks at them!  We also got some really great looks at Crown before getting some looks at Dyad and her 2021 calf.  This pair hung out at the surface and swam right next to the boat!  After they dove, we got some great looks at a Mola mola too!  We got some final great looks at Tripod and Tongs before we had to head back to Boston.

The 230pm whale watch made its way out towards the same area in hopes for similar success.  We started on the pair of Music and Pitcher who gave us some beautiful fluking dives.  We spotted a few other blows in the distance so we decided to check them out.  We are very glad we did because it ended up being Crown and Crystal who started breaching as soon as we got there!  Both whales breached several times and then began flipper slapping and lobtailing!  After the pair calmed down, we went on to get some looks at Tripod and Tongs.  These two were moving slowly through the area but also gave us some beautiful fluking dives.  We got some final looks at Dross, her 2021 calf, and Bounce before we had to head back to Boston.  It was a really fantastic trip out on Stellwagen Bank today!

This morning we embarked in thick fog towards the northwest corner of Stellwagen, it can be hard to find whales when visibility is low but luckily the multitude of animals around made this a nonissue. We started our trip with flipper slapping humpbacks that turned out to be Tripod and Tongs. They eventually calmed down and we enjoyed several looks at this duo before moving on towards a few other individuals in the area. Crown was zooming around the bank, but we spent the remainder of our time with Bounce and GOM-1563. These two made several close approaches, with Bounce at one point diving right under our boat! Crown joined up with this duo just as we were starting to make our way back towards land and it ended up being a great day out at sea!

The Aurora headed to the northwest corner of Stellwagen Bank in search of whales. We saw a great deal of splashing in the distance, and upon closer inspection, we discovered some flipper slapping humpback whales! These two continued to exhibit this behavior right next to us, much to our delight. These ended up being two known humpbacks, Crown and Crystal! We continued to watch these two whales splash around for quite some time, with Crown pooping on one of her dives (see first photo). This is a welcome sign to us that she is feeding regularly. As these two finally began to settle, they came closer to us, giving us some amazing looks at them. With so many whales nearby, we began to check out some of the other spouts. We very quickly found ourselves amongst two other humpback whales. These were two regular females to the bank, Tripod and Tongs. They were resting motionless at the surface for a few minutes, allowing us to really appreciate their massive size. As these sleepy giants woke up, they treated us to some beautiful fluking dives. With that and the setting sun, we headed back to Boston. It was a remarkable afternoon on the water!