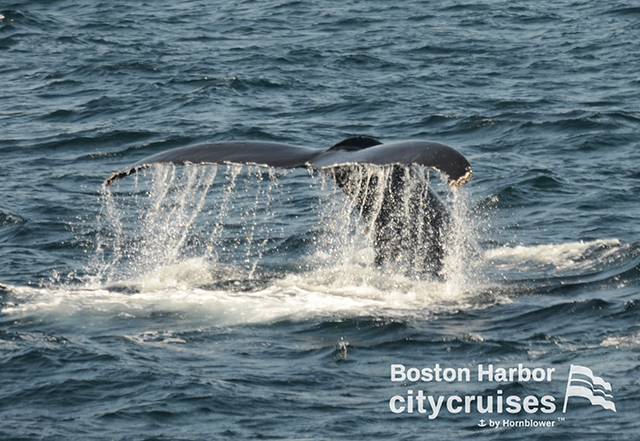 The 10am whale watch embarked towards the southern end of Stellwagen Bank in search of marine wildlife. After a bit of traveling, we finally spotted several spouts and splashes around the middle of the Bank. We started with a few tail breaches and flipper slaps from GOM-1562 before this whale went on a longer dive. We also enjoyed watching Crystal very slowly traveling south before we caught up with Dross and her calf. The calf surprised us all with a big tail breach before settling down to snooze. Dross came up once with her signature slow lunge before she too decided to take a nap alongside her calf. We had several great looks at these sleepy whales before making our way back towards land. Not far from the bank we spotted an ocean sunfish, and as we were spinning around to glimpse at this large fish, we could see a few big breaches from some of the whales we had just left. A great bonus few last looks before our time on the water was ultimately up.

The Asteria headed out on the 10:00am whale watch towards Stellwagen Bank in search of marine wildlife. We had barely left the harbor when we spotted our first mola mola of the day!

We continued on to a little west of the southwest corner and spotted Crown, a very distinct whale due to her severe entanglement scars. Crown was taking longer dives, so we headed a north where we had spotted a multitude of blows. We found ourselves with an association of five different humpbacks – including Glo, Gunslinger, Pitcher, Music, and Bounce. We haven’t seen Gunslinger yet this year – and it was incredibly impressive to a group of five big females so close together!

As we were headed back to Boston, we noticed a big splash and were able to see a BREACHING MOLA MOLA! I have never seen a breaching ocean sunfish and it was absolutely incredible to see this bizarre fish launch itself repeatedly out of the water. As we got closer, we got to see that this mola mola was one of three hanging out very close together. These mola molas were potentially feeding – as we spotted a juvenile lion’s mane jellyfish nearby.

What an absolutely awesome experience and a unique trip!