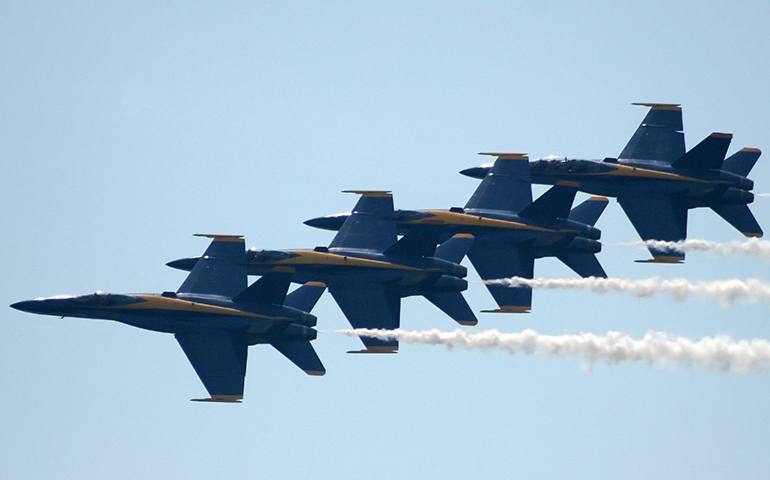 Fleet Week is an annual event that draws tens of thousands of people into San Francisco. The free series of events is centralized in Fisherman’s Wharf and features multiple air shows above the Bay by the Blue Angles, the Parade of Ships and ship tours, to name a few of the festivities.

Fleet Week began in 1981, thanks to former Mayor Dianne Feinstein, to honor the US Armed Forces and to educate civilians and military personnel about best practices in humanitarian assistance. It’s held every year in San Francisco on the first or second weekend in October.

The highlight of the weekend is always the Fleet Week Air Show, which is staged by the US Navy’s Blue Angels, between the Golden Gate Bridge and Alcatraz Island. They will perform Friday, Saturday and Sunday afternoons from 3:00-4:00pm, but lucky spectators can watch their practice runs through the city’s skyscrapers on Thursday as well.

Another high point is the Parade of Ships, which features the fleet entering the San Francisco Bay under the Golden Gate Bridge. (Editor’s Note: Apparently, San Francisco is host to the largest parade of ships on the west coast.) The grand spectacle is led by the San Francisco Fire Department fire boat, and then followed by vessels from the U.S. Navy, U.S Coast Guard and Royal Canadian Navy.

Almost all of San Francisco’s Fleet Week activities are along the northern waterfront district of Fisherman’s Wharf. The schedule of events includes the airshow featuring the Blue Angles, ship tours, live music and other entertainment all weekend long.

For a breakdown of the current schedule for 2019, please check the website at https://fleetweeksf.org/events/. Here’s what we have on board for you right now: