Ruka kwa yaliyomo
Brands / Niagara City Cruises / IS IT OR ISN’T IT? YOUR QUESTIONS ANSWERED ABOUT NIAGARA FALLS

IS IT OR ISN’T IT? YOUR QUESTIONS ANSWERED ABOUT NIAGARA FALLS

Brands » Niagara City Cruises » IS IT OR ISN’T IT? YOUR QUESTIONS ANSWERED ABOUT NIAGARA FALLS 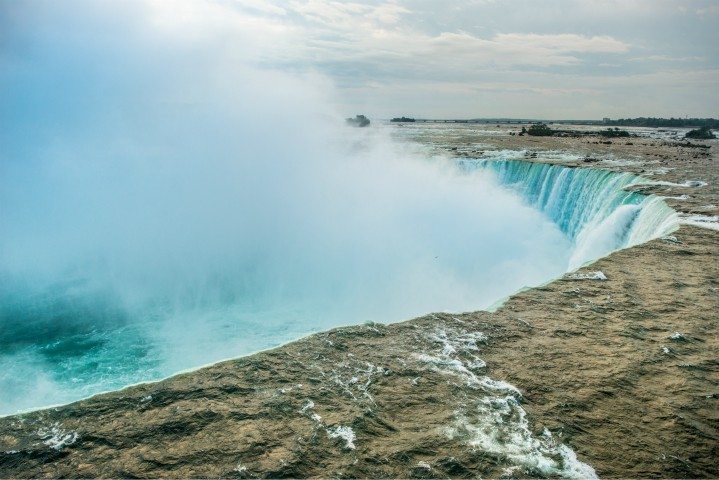 Each year it is estimated that Niagara Falls, Ontario welcomes 12 million visitors.  Travellers are drawn to the geological beauty and roar of Niagara Falls. When visitors arrive to the city they will discover not just three major waterfalls but a city of excitement filled with five star hotels, award-winning restaurants, hundreds of wineries and of course so many amazing family-friendly attractions including Hornblower Niagara Cruises.
If you have just purchased your daytime ‘Voyage to the Falls’ boat tour tickets and are looking to learn more of what you will see when touring the waters aside from the world famous waterfalls then have a read to find the answers from questions our previous guests have asked us.

Q: How old is Niagara Falls?

A: Geologists say that Niagara Falls is approximately 12,500 years old. Niagara Falls was created when thick sheets of ice once covered the land. Due to a number of geological effects including the rebounding of the land from the ice, the process stopped. About 10,500 years ago the meltwater changed it route moving towards Northern Ontario and bypassing Southern Ontario. When the ice began to melt it drained from Lake Erie, Niagara River and Lake Ontario, out to the St Lawrence River and then finally out the Atlantic Ocean. Due to a violent encounter the Niagara Riverbed that was buried from the last Ice Age joined with the Niagara River. The falls at this time tore out the glacial debris and filled the basins with water that our boat tour journeys to today.

Q: How much water really goes over the Falls?

A: It is estimated that 6 million cubic feet (168,000 cubic meters) of water go over the brink of the falls every minute. This is equivalent to 1 million bathtubs full of water going over the Falls!

A: What makes Niagara Falls so unique is its width and amount of water the plummets over the brink. The amount of water from the Great Lakes would cover North America in 1 meter! Niagara Falls stands at 175 feet (53 meters), however it is not the tallest waterfall in the world. Angel Falls in Venezuela is standing at 979 meters ( 3,211 feet) and has an elevation of 1,283 meters.

Q: Why are there so many segulls on land and at the base of the Falls?

Q: What is the future of the Falls?

A: The future of Niagara Falls is unknown. Every year Niagara Falls erodes 1 foot back however geologists are predicting that since the water is steadily controlled from the U.S. and Canadian Hydro Power Plants that the water will erode 1 foot every 10 years. You might be asking yourself, ‘If Niagara Falls erodes back 1 foot each year then where was Niagara Falls originally located? Niagara Falls was originally located where the Suspension Bridge once stood and the Falls has since moved back to its location where you see it today. Climate control also has a huge control on the future for the falls where the climate can and will affect the Great Lakes and the Niagara River. Some suspect that the basin of the Niagara Gorge could dry up while others believe it could be replaced by series of rapids.

Q: Do people cheer on the boat everyday?

A: This is a definite yes! Our boat tour truly is a thrilling, nothing-like-it experience. The screams of joy from the tingling and cooling mist landing and raising the hairs on your arms is a frequent occurrence on our daytime boat tours.

Q: Why are there so many rainbows over the waterfalls?

A: When you come for a daytime boat ride you are guaranteed to witness a colourful rainbow when the sunshine reflects from the mist of the falls. Over one hundred years ago, Niagara Falls was one of the best locations to view the Falls and in our personal opinion it still is!

Q: What type of rock forms the Niagara Gorge?

Q: What bridge is that?

A: When touring the Niagara Gorge you will discover a structured bridge known as the ‘Rainbow Bridge’ and it’s one of the largest international border crossings between Canada and the United States .

Where does the word, ‘Niagara Falls’ come from?

A: It is believed that the word, ‘Niagara’ is derivative of the Iroquoian native word,’Onguiaahra’ meaning ‘thundering noise.’ Another meaning for Niagara was the the word ‘The Strait’ which is also believed to be named after the narrow waterway from Lake Erie to Lake Ontario. The Niagara River was not referred to as the Niagara River but as ‘the Strait.’
To learn more about Niagara Falls Fun Facts, visit our Falls page  http://www.niagaracruises.com/explore-falls
Have a question about Niagara Falls? Ask us a question!
#niagaracruises
niagaracruises.com