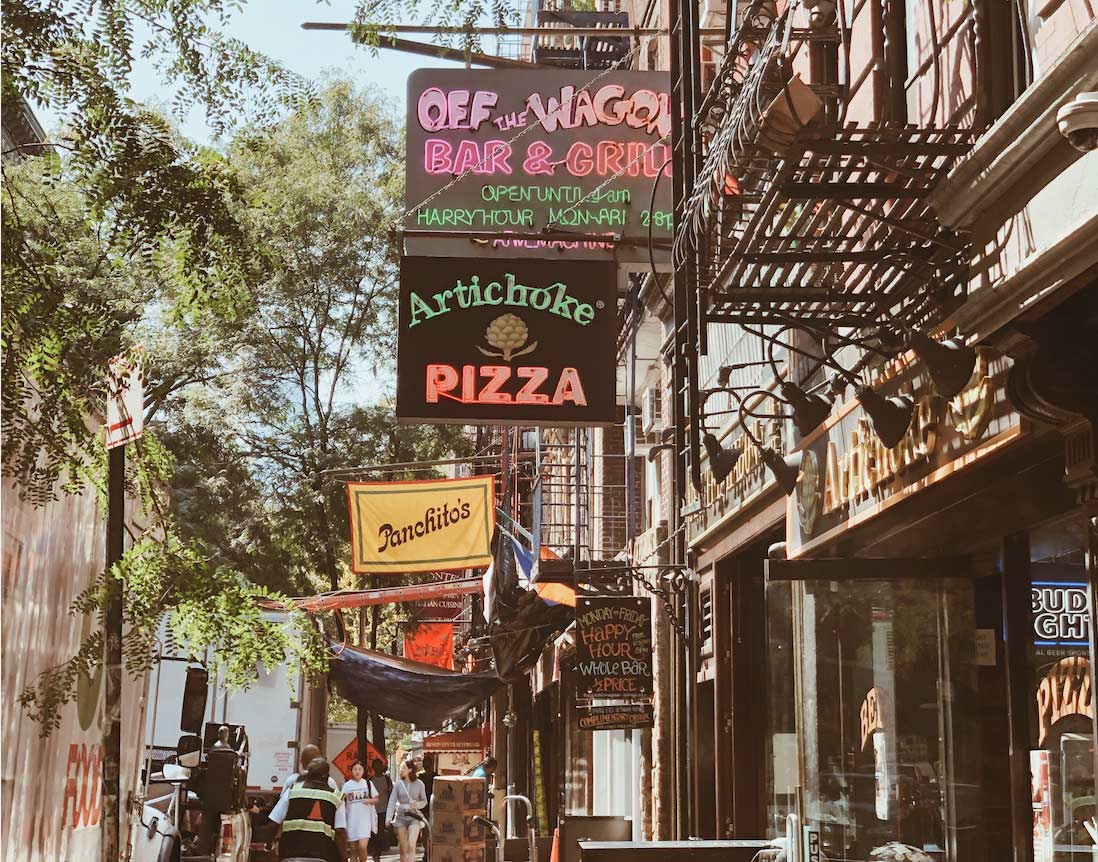 Greenwich Village, often just called The Village to tried-and-true New Yorkers, has a long history. It’s a great spot for travelers to New York who want great food, good music, historic charm, and an eclectic feel to the city that never sleeps.

Did you know that you can trace the history of this hip area of New York City to the 16h century when Native Americans called this marshland Sapokanican? You would have found them fishing and camping in a trout stream that was eventually called Minetta Brook. Later it became Noortwyck when Dutch settlers came in and cleared pastures. The Dutch then brought freed African slaves who farmed land parcels there.

“After the English conquest of New Amsterdam in 1664, the settlement evolved into a country hamlet, first designated Grin’wich in 1713 Common Council records.” 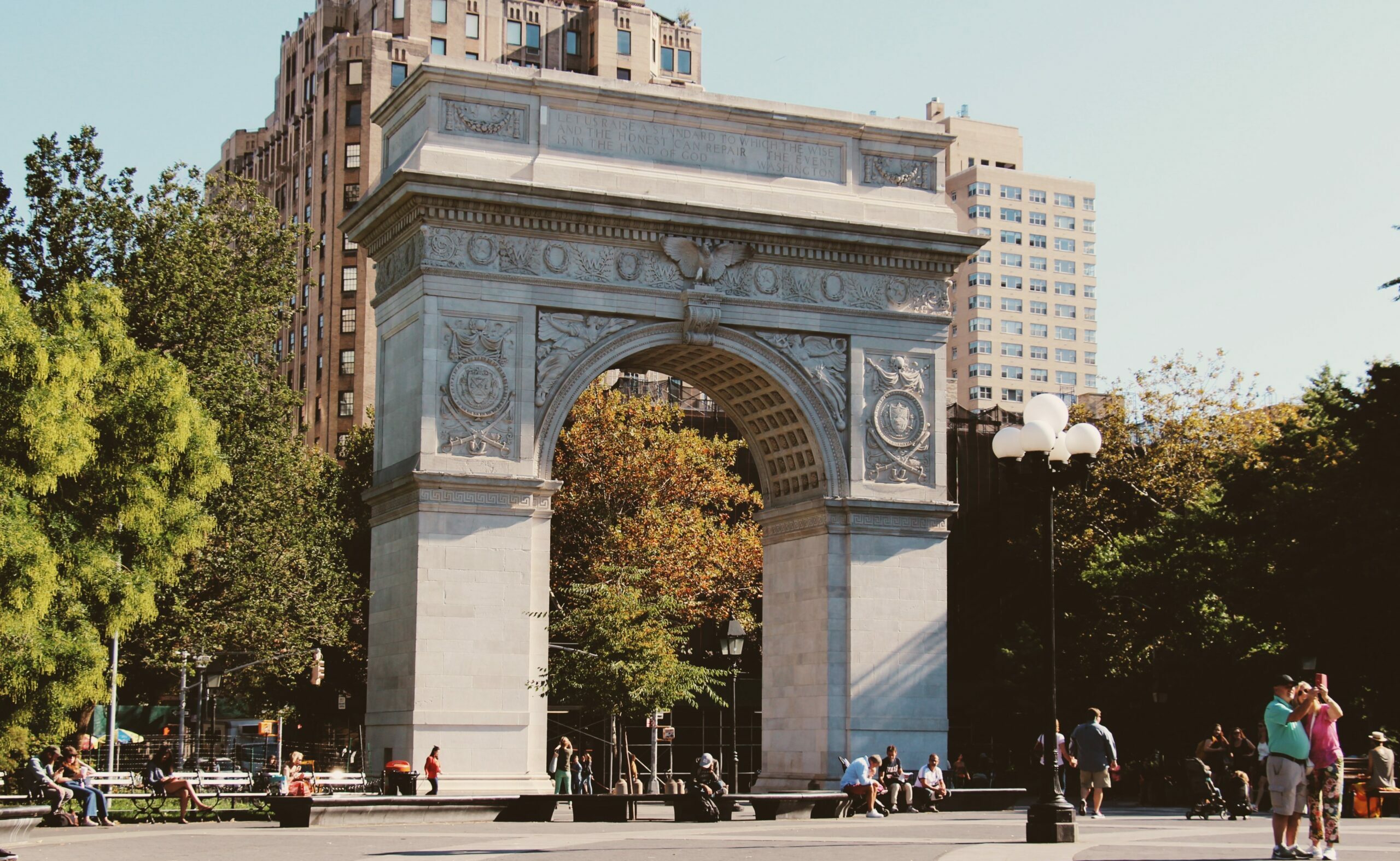 A Historic Past and a New Era for The Village

From the American Revolution of the Federal Period (1790-1820), the Empire Period (1820-1860) and the Gilded Age (1870-1900), Greenwich Village went through a host of changes. There were outbreaks of epidemics, the creation of Washington Square Park (once potter’s field and a place that housed public gallows), development of more upscale neighborhoods, and a wave of immigration that offered much change to the area.

The 20th century brought so much to Greenwich Village. It was “ethnically diverse” and a neighborhood filled with many artists and writers, not to mention musicians. “By the start of World War I it was widely known as a bohemian enclave with secluded side streets, low rents, and a tolerance for radicalism and nonconformity.” 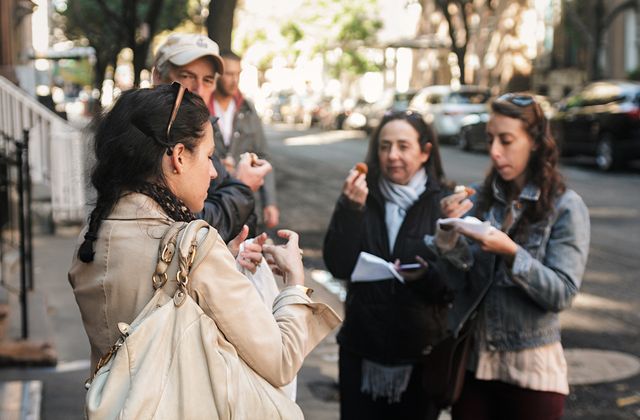 h standing tall in the middle of the park, which is named after George Washington. It stands directly near the fountain, a perfect spot to meet friends and get sprayed when it’s hot outside.

If you’re there during the warmer months you’ll find a host of musicians, people sunbathing, others walking their dogs, skateboarders, chess players, and the usual NYU students hanging out mere minutes from their dormitories.

The park has plenty of amenities, including dog-friendly spots, a couple of places to grab a bite, playgrounds for children, spray showers, and even Wi-Fi hot spots. Come June you’ll want to check out Films on the Green, which is free.

While New York City itself is one of the top places for some of the best restaurants, Greenwich Village is known for some tasty dining spots to sit back and relax for a delectable meal. The neighborhood is home to some authentic Italian joints as well as French, Japanese, Middle Eastern, and great vegetarian eateries as well.

Many Italian immigrants made The Village their home and it sprung some fine, authentic Italian restaurants. With all the food to stop and taste, try the Greenwich Village NYC Food Tour. You’ll sample nine food tastings at seven family-run restaurants, which will basically cover breakfast and lunch.

Discover some Greenwich Village Italian heritage sites, “from the church with the first Italian congregation in the US to the birthplace of New York’s first cappuccino.” You’ll even get to taste an authentic espresso, taste true New York pizza, and learn why gelato is not ice cream and vice versa. It’s safe to say you’ll indulge a bit and feel fully satisfied after your meals.

Jazz in The Village

While you’re visiting Greenwich Village, you’ll want to take in a jazz club or two. And this part of town has many so it might be hard to choose just one.

One of The Village’s most notable jazz club is the world-renowned Blue Note, where legendary jazz musicians have been gracing the stage since 1981. While notable jazz greats such as Chick Corea and Ron Carter have played the Blue Note, it’s also home to some of New York City’s own top musicians.

Other jazz spots include Arthur’s Tavern, known as “One of the Oldest West Village Bars,” which opened in 1937 with a speakeasy type of vibe, fitting the era at the time. Today live jazz is on tap every night. Even the famous Charlie Parker performed at Arthur’s Tavern, which is housed in a historic building.

Step into the Smalls Jazz Club, originally founded in 1994 in a basement without a liquor license. It has had other owners, been bankrupt, and moved but it’s still here and pumping out some of New York City’s finest jazz. After everything Smalls has been through, it’s now stronger than ever with a reputation around the world for great jazz.

When in The Village, you’ll want to check out one of the many independent films being shown.

IFC Center has been around since 2005. It was originally the Waverly theater but was renovated and now is a great place to view today’s great independent movies. IFC has five state-of-the-art cinemas and premiers many new indie films as well as foreign movies and documentaries. In November, you can catch DOC NYC there, which is the largest documentary festival in America.

Since 1972, The Quad was known for having more than one screen in one building, so it had more than one film playing at once. “…it finally gave New Yorkers the range of cinematic options reflective of their hometown’s diversity.”

In between checking out the park and catching some jazz, just meander through the delightful streets of The Village and you’ll find some of the most charming buildings to admire. The Greenwich Village Historic District was designated such in 1969.

“One of the city’s oldest and still largest historic districts, it’s a unique treasure trove of rich history, pioneering culture, and charming architecture.”

Stroll down Washington Square North for the red brick houses that were built in 1832 for wealthy families and then head over to Gay Street. It’s only one block long. The tiny street has federal-style homes that were built in the 1820s as well as Green Revival-style houses. Make sure to walk to 75 ½ Bedford Street to view “The narrowest house in the Village.”

Just keep walking because you’ll continue to uncover more of the charm of this most diverse and alluring part of New York City. Chances are you’ll never want to leave.

Поделиться статьей
Twitter Facebook
Previous Story Things to Do in Greenwich, London
Next Story Visit Some of the World’s Favorite Museums