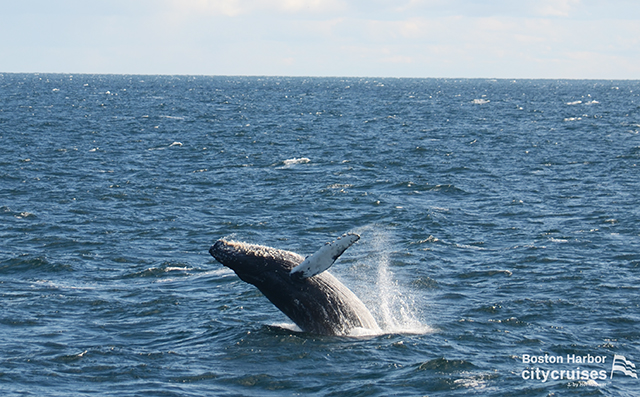 Please find the Naturalist Notes for the week of 11/02/21 to 11/06/21 from the onboard team of naturalists for our New England Whale Watching tour in partnership with the New England Aquarium.

After such a long stretch of being on land due to a nor’easter, it was refreshing to get back on the water on this crisp and clear November day! Aboard the Asteria we took some enthusiastic passengers out to the NW corner, not sure of what we would find after the storm (some of the buoys recorded 30-foot waves last week!). As we spotted some gannets and gulls, our intern Heidi spotted a blow far in the distance, and as we approached, we saw a “white picket fence” of 8-10 whale blows gathered in a group. On further investigation, this group turned out to be feeding group of five and three, feeding in close proximity together with a few single whales nearby (we totaled 10-11 humpbacks for the day).

The group of five consisted of Dome and calf, 3.14, Lutris, and Azrael, and the group of three were females Venom, Milkweed, and Jabiru (sans calf, hopefully it has weaned on its own successfully). Since both groups were feeding quite near each other, Dome’s calf liked to mingle with Venom’s group occasionally. In the distance we even saw a breach, and another humpback flipper slapping repeatedly.

It was interesting to see the two groups feed almost on top of each other, and we wondered if perhaps they were bumping into each other underwater. To wrap up our exciting day, Dome’s group close approached our bow – and we took in the sounds of all their exhalations.

Today’s trip was a perfect example of all the evidence showing that the fall migration is in full swing, and what a fantastic trip it was. We traveled to the northwest corner of Stellwagen Bank, spotting harbor seals, gannets, scoters, and cormorants along the way. Upon reaching the feeding grounds, we spotted multiple blows scattered throughout the area. We had a bit of a tricky time getting started with some close looks as the whales were moving around quite a bit and spending very brief bits of time at the surface but eventually we were able to watch closely a pair of humpback whales, Chromosome and Putter. The two eventually split and Putter swam off to join with another individual.

With at least ten other whales around, we chose to head to a group of three that seemed to be spending more time at the surface than most other individuals. What a great observation we had with these animals- there was certainly some whale social dynamics at play there! Two whales would surface head first, with one of the three flicking its tail at another, and one of the group rolling over belly up, and that was only what we could see above the waterline. I was ecstatic to see that one of the three was Echo 2014 Calf, who hasn’t been spotted by us this season. This young whale provided so much joy and light in the unprecedented and sometimes dark times last year and it was just wonderful to be able to say hello. Campground and Perpendicular were the other two in this mingling group- two more whales who haven’t spent a whole lot of time in the Stellwagen Bank National Marine Sanctuary this season. Jabiru is the only other humpback that we have a definite match for tonight and I can’t wait to see who hangs around in the days to come!

Today aboard the Asteria we headed out towards the NW corner of Stellwagen Bank National Marine Sanctuary. Along the way we spotted many scoters, eiders, and harbor porpoise, and even some splashing blue fin tuna along the horizon. As we approached the eastern edge of the corner, we were elated to find our favorite mom/calf duo of the season, Dross and her 21 calf. At first this pair was spread out a bit, but shortly after this pair joined up again and began subsurface feeding. We began seeing some bubble clouds from Dross, and even a few herring pop up out of the water. Later on during our trip, we observed quite a large spiral net and Dross came up along the edge filtering out water. We even think her calf helped make some bubbles too!

The 10am whale watch headed out on the Aurora towards blustery seas and the northwest corner of Stellwagen Bank. Despite high winds, we quickly found a multitude of blows in the area! We first spent time with Dross, who was classically bubble-cloud feeding, and Dross 21 Calf. We then watched Bungee and an unidentified adult. Bungee hasn’t been seen yet this season by our boats – so it’s always great to see a new whale this close to the end of the season!

While we were watching the adult pair take longer dives, our attention was captured by a flurry of surface activity from our original duo.

We headed back to Dross and Calf, and were treated to an absolutely spectacular show! For the rest of the trip, the calf seemed to spent more time out of the water than in the water – and we got to see breaches, tail breaches, lobtails, and chin slaps! This calf was producing so much white water all around out boat, we never knew exactly what to expect. At one point the calf tail breached immediately off our right pulpit – some passengers certainly got a little sea spray to the face!

The calf was incredibly expressive today; coupled with all the surface activity, we also got to hear some very loud trumpeting. Mom was a little far away, and it’s likely the calf could have been communicating. However, despite all the raucous from calf, Dross didn’t seem to be bothered – as she continued to diligently bubble-cloud feed a small distance away.

One of my favorite moments of the trip was when this little whale rolled completely on its back while it lob-tailed – exposing both its tail and its little flippers (see photo).

Despite the wind, this was truly a remarkable trip! As the season comes to a close, you don’t know exactly when is the last time you’ll see certain individual whales- and I can say this was a truly spectacular display from this “little” whale that we’ve been honored to watch the whole season.

Yesterday’s whale watch rolled over the waves to the Stellwagen Bank National Marine Sanctuary until we spotted a blow to the north of the bank itself. We watched this whale swim steadily to the north until it surprised us with a change in direction and surfacing just off the starboard side. Rattan is a new whale for this season’s list and we enjoyed visiting with this new-regular until we decided to investigate two pairs of humpbacks on the corner. We found Bungee and Mallard as well as Mudskipper swimming with a buddy, with both pairs seemingly charging after fish, as evidenced by a few sporadic surface lunges. We spotted another pair to the west- likely a cow/calf pair as we were soon joined by a very little humpback who seemed a bit curious and playful before swimming back to the adult. Diving gannets dotted the waters around us and we were passed by a number of other seabirds, including surf scoters, cormorants, brants (geese), and eiders added to the already spectacular fall day.