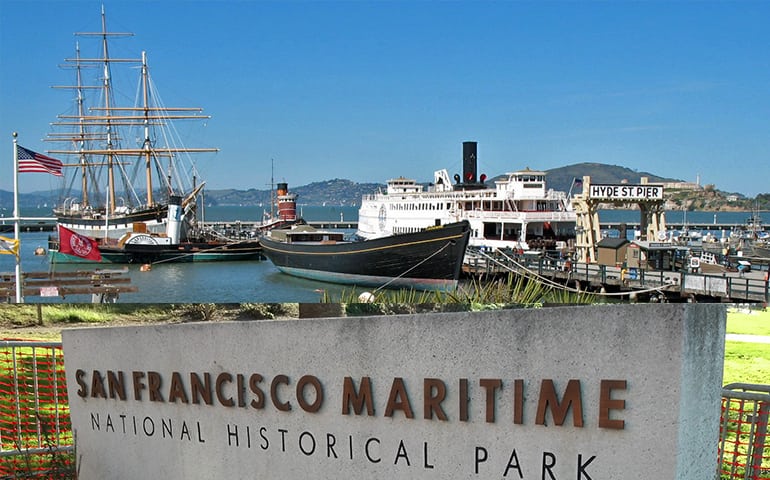 If you have a passion for history, here is an interesting excerpt about another nautical San Francisco park. Featuring historical ships and tons of intriguing stories we invite you to enjoy “visiting” the San Francisco National Historic Park. Enjoy and happy sailing ~

San Francisco Maritime National Historical Park maintains and exhibits the largest collection of historic ships in the United States, all of which are moored along Hyde Street Pier on the northern waterfront. There are four ships open to visitors in the collection: Balclutha (1887), Eureka (1890), C. A. Thayer (1895) and Hercules (1907). The park also has a visitor center with 20,000-square feet (1,858 square meters) of exhibits relating San Francisco’s vibrant waterfront history and the largest maritime library west of the Mississippi; a research destination in itself. On any given day, shipwrights, riggers and volunteers may be seen displaying once-common skills of the maritime trades as they maintain both ships and small-craft collections. Dominating the park site is the Maritime Museum Building whose Streamline Moderne New Deal-era architecture and murals date to its original Aquatic Park Bathhouse design completed in 1939. The Hilaire Hiler murals preserve an art aesthetic prevalent in Paris between the two World Wars.
Did You Know?
The South End and Dolphin Rowing and Swimming Clubs that occupy the eastern end of Aquatic Park Beach have been operating at Black Point Cove since the 1890s. The Rowing Clubs, the San Francisco Recreation League and the North Beach Italian turn-of-the century women’s club, Vittoria Colonna, helped lead the political fight to save the last undeveloped cove on San Francisco’s northern waterfront from being commercially developed.place holder

Full article written by ranger David Pelfrey, National Park Service. See the full article here.
The San Francisco Maritime National Historical Park is not far from Alcatraz Cruises Pier 33 Landing, just a short, 15 minute walk with many other attractions and food along the way. The Park is also another way to become immersed in San Francisco’s rich waterfront history. And if you are so inclined for another boat ride after an Alcatraz Cruises’ ferry to and from Alcatraz Island, you can check out the sailing tour options on the sailing ship Alma.