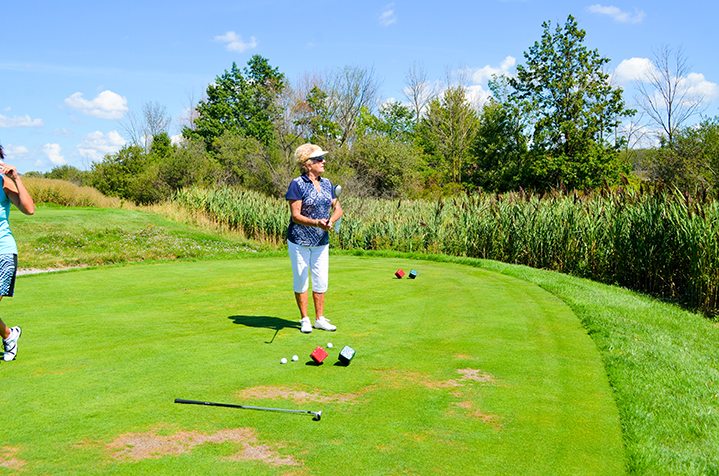 The fall season is slowly coming upon us in the Niagara Region and with the cooler weather comes the last of this seasons golfing.
There is still time to get in a few last drives and the links are definitely still green enough for 18 holes. We recently had the pleasure of joining Les Clefs d’Or Niagara for their 11th Annual Golf Classic. Over 70 golfers from all around the Niagara region joined us to make the day a great success.

August 29th, 2016 began with sunshine and smiles from all registering participants and Les Clefs d’Or Niagara members volunteering. The host course Hunters Pointe Golf Course was an incredibly beautiful venue and with the perfect weather for golf we couldn’t have asked for a better day.

18 foursomes began teeing off in a shotgun start at noon and made their way around the course. Hole 16 was an extra special stop for many players as Hornblower Niagara Cruises sponsored this hole. Hornblower was also proudly the title sponsor of the tournament.

Chip in the Boat Contest

Hornblower’s very own Joanna Presti played selfie photographer and hosted the Hornblower Niagara Cruises Chip in the Boat Contest. Players purchased 3 balls for $5 to try their best chip stroke at getting a ball into a floating boat in a small pond near the hole.

Any balls that made it into the boat counted towards raffle tickets for the coveted prize package. Many attendees participated but few walked away with tickets for the special raffle. And only one guest took home the bucket filled with ice cold local Niagara craft beer and wine.

Speaking of local Niagara craft beer, Niagara Brewing Company was the drink sponsor of the event. They had sample pours of their Amber Ale, Lager and Honeymoon Peach Raddler for golfers to help quench their thirst.

The evening concluded with an awards ceremony and fabulous dinner put on by Hunters Pointe Golf Course. Most Niagara Brewing Company beer was poured and guests enjoyed some social time with friends who were not in their foursomes. Everyone enjoyed the prizes which were handed out for everything from closest to the hole to most honest team awards!

As a part of being the title sponsor of the Les Clefs d’Or 11th Annual Golf Classic, Hornblower Niagara Cruises gifted each player with tickets on our Voyage to the Falls Boat Tour.
All those players who may need help getting here can find us in Ниагарский водопад, Онтарио, Канада. Approximately one and a half hours away from Toronto, Ontario. It is also just across the border from Niagara Falls, New York. Niagara Falls, Ontario sits between one international border crossing and two major international airports, one located in Buffalo, NY and another in Toronto, Ontario making it easy for guests from all over the world to visit.

A Golf Tournament to Remember

Overall a great day was had by all! Hornblower Niagara Cruises general manager Mory DiMaurizio who lead the HNC foursome even had an opportunity to speak at the dinner and thank Les Clefs d’Or for organising such a great event.

We can’t wait for next year’s Les Clefs d’Or Niagara 12th Annual Golf Classic! But until then you can check our all the photos from the event in our Flickr album here.
#NiagaraCruises
Niagaracruises.com