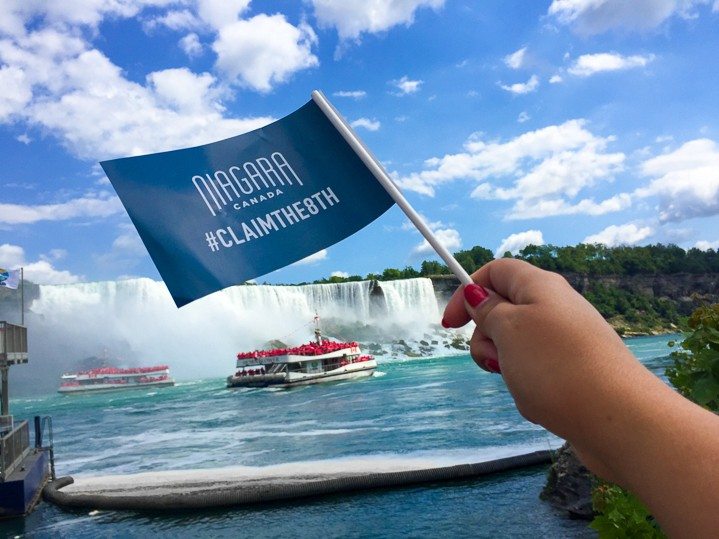 So with there being so many different top 7’s, it leads us to ask, ‘Who holds the title for the 8th place?’ It has been up for debate about what the 8th Wonder of the World should be. Everything from Harry Styles hair, to England’s famous Stonehenge has been given support. And yes, of course, Niagara Falls has always been on the list.
Before we get into why we feel we should claim the 8th Wonder of the World title, some history on how Niagara Falls became a world famous geological wonder.
Niagara Falls is a combination of three waterfalls. The Canadian Horseshoe Falls, American Falls and Bridal Veil Falls and connects Lake Erie to Lake Ontario. The Horseshoe Falls which is 85% Canadian owned is the highest flow rate waterfall in the world. Pouring down water of 2,400 cubic meters per second! Not to mention it stands over 50 meters tall (164 feet) and is an incredible site to be seen.
The Niagara Region and Niagara Falls themselves were formed over 12,500 years ago by the Wisconsin glaciation. On top of the creation of the actual waterfalls everything in Niagara has benefited from the geological evolution. From the sandy soils of the Niagara-on-the-Lake vineyards, to the gravel and clay of the Beamsville Bench tender fruit farms, the Niagara Region has Niagara Falls to be thankful for.

As well as forming the geology of our region, Niagara Falls also helps power it! Since 1759 people in Niagara have been harnessing the power of the Falls to help power first sawmills and later electricity.
Today, Niagara Falls is responsible for powering over 4.4 gigawatts of power that is produced at Niagara Power Stations in both Niagara Falls, Ontario and in Lewiston, NY. The Sir Adam Beck 1 and Sir Adam Beck 2 power over 1.3 million homes!

People from all over the world have put Niagara Falls on their bucket list contributing to the 12 million visitors we see each year. And they all can’t be wrong, it’s definitely worth the visit. Seeing and more importantly experiencing Niagara Falls is truly an inspirational visit.
When you are on our Voyage to the Falls boat tour and in the mist (#InTheMist) you can feel the power and thunder of the Falls. With the rainbows and sunshine surrounding you and hundreds of smiling faces you can’t deny this is a world famous wonder!

And where else in the world do you get to enjoy a stunning fireworks display 3 nights a week in the middle of the the Niagara Gorge? Just one more reason Niagara Falls is unique and unlike any other destination.

Niagara Falls has decided as a group to come together and once and for all settle the debate on who holds the claim of being the 8th Wonder of the World.
Follow along on social media as the #ClaimThe8th hashtag covers Facebook, Twitter and Instagram with many reasons why we are deserving of the title and will claim it on August 8th 2016. Be apart of the conversation, watch Niagara battle some of the world’s other wonder contenders.
#NiagaraCruises
#ClaimThe8th
niagaracruises.com