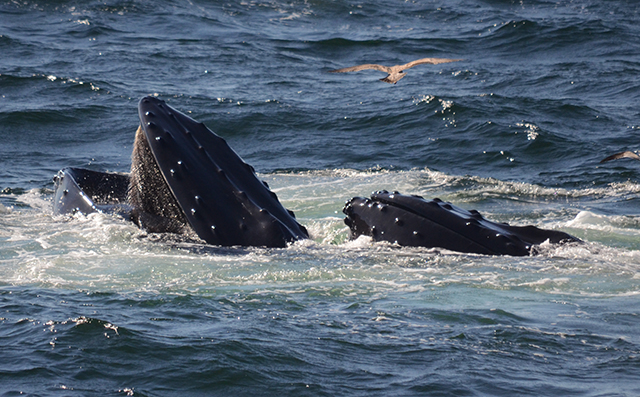 The 10am whale watch headed out on the Asteria​​​ towards Stellwagen Bank and were ecstatic to find a multitude of blows! We spent the first half of our trip with Abrasion and her 2022 calf! This calf was definitely curious of our boat and kept popping up off our starboard side. Abrasion’s calf has a very unique fluke – having distinct white markings on the dorsal/back side of the fluke. These white markings enabled us to easily track the whale underwater, and we were able to see it swim and nurse right next to our vessel. We also saw the calf attempt little “handstands” – or when the calf lifts its tail high out of the water while extending its flippers. We then moved to another area with at least 5 humpbacks! As we approached these whales, we saw Lollipop burst into a full body breach then launch into flipper slapping! Lollipop then joined up with Reflection – a great example of social dynamics we sometimes see after surface activity. We also got great looks at the duo Etch-a-Sketch and Banyan who swam right at our vessel! We finally got a last look at the humpback Ember before heading back to Boston!

What an awesome day!

On the Aurora on 10-7-22, we had a fantastic day along the southern end of Stellwagen Bank. Throughout our trip, we spotted 20-30 scattered humpbacks, including at least one mom and calf pair. As the wind picked up, we saw several breaches and flipper slaps. We also saw some small groups of 3-4 humpbacks join up, appearing to charge at the surface and indicating they were chasing after prey. We also spotted many diving gannets! On our way home, we also had a bonus treat of 400-500 Atlantic White-Sided Dolphins! One of the biggest pods I have seen in quite some time.

Today aboard the Aurora, the 12pm whale watch made its way towards the southwest corner of Stellwagen Bank in search of whales and other marine life.  Once we approached the area, we saw multiple blows from several different humpback whales.  There were several large groups that crossed paths several times.  These whales were taking very short dives, and they were not moving very far which allowed us to get some incredible looks at all of the humpbacks.  There were several times where the humpbacks surprised us, and they popped up right next to the boat!  Some ID’s I was able to make include GOM 1850, Reflection, Milkweed and her calf, Apex and her calf, Arroyo, and Rocker!  Right before we were about to leave, Rocker began bubble feeding.  Rocker would lunge up through the bubbles allowing us to get some incredible looks at this humpback!  Arroyo eventually joined in doing some kick feeding herself!  Both would lunge up right near the boat! After some incredible bonus looks, and of course some beautiful fluking dives, we had to head back to Boston.  It was an incredible day out on the water!

This morning, the Asteria headed out to Stellwagen Bank in search of wildlife. We saw some elusive scattered blows around Mid-Bank before finding 10+ Humpback Whales on the Southwest Corner, split into several smaller groups! We spent most of our time with a group of Humpbacks which included Ganesh’s 2014 Calf with HER new calf, Spell and 3.14. These animals were taking very short dives and staying nearby, which allowed some great looks. We ended our trip with an amazing close approach by the young calf of Ganesh 14 before we headed back to Boston, excited for what the afternoon had to bring!

The afternoon trip headed back to the Southwest Corner and found our groups of Humpback Whales once more, as well as some quick looks at a Mola Mola! We started by catching up with Ganesh 14 Calf and her new calf, as well as Spell, but this time they were joined by GOM-1850. These whales gave us some amazing close looks before taking some very short dives once more. The young calf was always nearby, giving us some amazing close approaches. While we watched this group, another group of Humpbacks made its way into the area. This group included Milkweed and her calf, as well as 3.14, Eruption and the 2016 Calf of Angus! We were surrounded by these whales, purely in awe of how many there were. After saying goodbye to our whales, we headed back for Boston. Before we got back, we saw a small pod of Harbor Porpoises before seeing a several mile long wall of small splashes. We found ourselves with over 1,000 Atlantic White-Sided Dolphins!!! They stretched as far as the eye could see, surrounded by diving birds. Clearly there were a lot of fish to feed on, and it provided an unforgettable end to our wildlife sightings for the day. With a gorgeous sunset in front of us and a beautiful harvest moon behind us, we continued on into Boston.

What an incredible day on the water!

The 10 am whale watch aboard the Asteria made way for the southwest corner of Stellwagen Bank. Upon arriving, we were greeted by 6 scattered humpback whales, all engaging in their own kickfeeding! We spent much of the first few sightings with Palette, a well-known female humpback whale. Our next individual sighting was of another female, Habanero! Soon, the whales in the area formed a larger group of five, as about 5-7 more humpback whales moved into the area. Groups of Northern gannets and shearwaters also made their way into the area to pick off the fish left behind by the whales. We watched the larger group engage in some bubble net feeding, while lone minke whales darted around, scooping up their own meals. Gannets could be seen diving every which way, and a fin whale cruised by, allowing for a multispecies day! Our day ended with a side-by-side lunge from two humpback whales just off our port side! It was a perfect end to a perfect morning.

This morning aboard the Aurora the 12pm whale watch made its way towards the Southwest corner of Stellwagen bank in search of whales and found 15-20 feeding humpbacks scattered around the area! These whales were busy blowing bubble clouds and nets, and kick feeding on all sides of the vessel. we also saw 5-10 more humpbacks in the distance, 2 minke whales and a small pod of 15-25 Atlantic white sided dolphins during our trip. We were able to ID Kappa, Habanero, Palette, Landslide, Alligator, Buckshot 22 calf, Zeppelin, and Rune and her Calf in the frenzy of feeding whales.

It was a fantastic day for whale watching!

This afternoon the Asteria made its way to the southern part of Stellwagen Bank in search of wildlife. We found ourselves with several blows all around us! We started with a group of 4 Humpback Whales, of which we were able to ID Indiana and Landslide. We got some incredible looks at these animals before they began to split up and part ways. So, we decided to take a little ride and headed east towards some more blows, before noticing a Humpback Whale flipper slapping! Upon closer inspection, we realized it was Zeppelin and her calf. The calf tail breached next to mom while she flipper slapped, before they both swam past us several times. As they headed away, we made our way over to some feeding Humpback Whales, mouths open while the Gannets dove around them. While we watched them dive in search of prey, we found ourselves with a huge Fin Whale and several small Minke Whales! As the Humpbacks resurfaced, we noticed it was another Mom and calf pair, Buckshot and her calf, who were also accompanied by Palette. We spent our remaining time watching this huge feeding frenzy before we had to say goodbye to our whales and headed back to Boston!